Calvary, Couponers, and Crafters » Bible Prophecy » End of the Age Prophecy Updates for 10/16/16 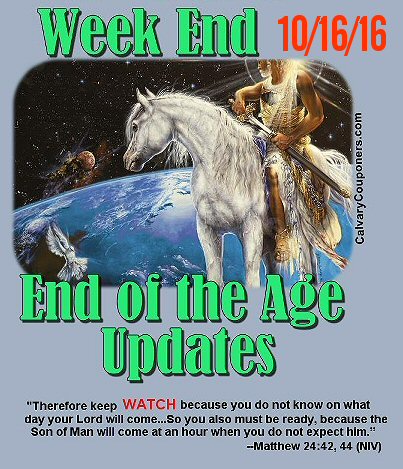 (no new videos this week that I could find, but he has a great blog and Facebook group)

Prophecy in the News: “Direct message to President Obama from a former practicing Muslim who became a Christian”:

Billy Crone – The World Religions Cults and the Occult:

“Gary’s Commentary on Not the Same Old World”:

L.A. Marzulli: Watchers 10 (the demon fairy video shared a while back was a hoax):

“Breaking: US Refueling Tankers Take to the Skies for War”:

“US Military Prepares For All Out War Amid Syrian Standoff”:

Other Videos by Steven this Week:

His Channel:  “World News Briefing”  Barry Stagner and Tom Hughes 10/13/16 (click on image below to bring up page):

Joel C. Rosenberg:  After many delays, the battle to liberate Mosul from a hellish ISIS nightmare is about to begin. Here’s the latest.

Why I Believe Trump Is the Prophesied President

Leaked Clinton email: Facade of peace talks better than nothing

Israelis believe Clinton will push them harder on peace, back her anyway – poll

B’Tselem head: I spoke out against occupation, not Israel, at UN

Israel to close off West Bank, Gaza for Sukkot holiday

‘Heinous crime against humanity’: how Saudi airstrikes have devastated Yemen

The US just bombed Yemen, and no one’s talking about it

US warship possibly targeted by Yemen rebels for a third time

Russia warns citizens to prepare for attack on homeland

The West and Russia Clash in Election in Tiny Montenegro

The world has more border barriers than at any time in modern history. The rise of walls marks an increasing wariness of globalization.

Trump insists election ‘rigged,’ calls for drug test for him, Clinton before debate

US detects what it says is failed N. Korean missile launch

Rare hunter’s supermoon to light up night sky this weekend

Flood, damaging wind threat to mount in northwestern US

Hurricane Matthew: Days of disaster unfold under a cloudless sky

UN chief in Haiti gets glimpse of Matthew’s destruction

Bermuda hopes for quick recovery after getting lashed by Hurricane Nicole

24 killed in stampede ahead of Hindu ceremony in India