Calvary, Couponers, and Crafters » Bible Prophecy » End of the Age Prophecy Updates for 1/1/17 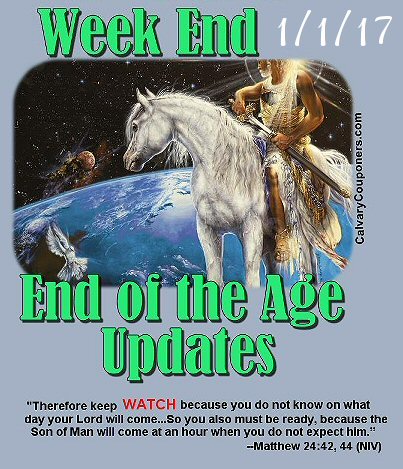 Hi everyone!  I’m still here, so please forgive me for my absence the past month. I hurt my back getting into the van to visit my mom and was in too much pain the first few weeks to sit upright for long to work on a blog post on my laptop.  You may have seen me on Facebook or Instagram, but that was on my phone laying back 🙂  Then Christmas happened and you all know how that goes 🙂  But I’m back and catching up on last Sunday’s prophecy updates and now I offer them for your review.  Have a great week!

The Jerusalem Channel – The Clouds of War:

Abbas doesn’t believe Trump will move US embassy to Jerusalem

‘Bloodshed will follow if Trump moves US embassy to Jerusalem’

Huckabee to Kerry: Yes, Israel is both Jewish and democratic

In Congress, a new battle emerges: 2 states or not 2 states

It’s the ‘Most Volatile’ Year for Political Risk Since WWII, Eurasia Group Says

Rosie O’Donnell: We have ‘less than 3 weeks to stop’ ‘mentally unstable’ Trump

Assange: ‘Stupid maneuver’ for Dems to dwell on Russian hacking

WikiLeaks Hints At Huge Upcoming Revelations: “2017 Will Blow You Away”

Hack Attack on Drudge Report a Sign of Chaos to Come

US says it can defend itself from North Korea missile attack

‘I didn’t expect this’: Homeowners cope with damage after deadly storms strike Southeast