Calvary, Couponers, and Crafters » Bible Prophecy » End of the Age Prophecy Updates for 1/8/17 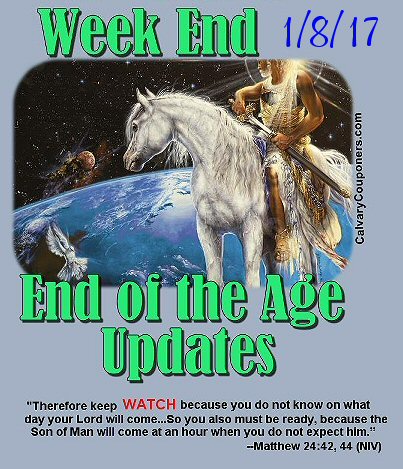 Hello everyone 🙂 Are you all getting off to the new year well? I hope so. I love the holidays, but I’m so glad to have things back to closer to normal 🙂  There’s so much going on in the world right now and wiser minds than mine are analyzing how Bible prophecy lines up with it all and they explain it to us all in the videos  below.  Here’s to a blessed and joyful year!  We’re one week closer to the return of Jesus!

Kerry, Abbas warn of an ‘explosion’ of violence with Jerusalem embassy move

Circle Jan. 15: 70 Nations Will Gather in Paris to Discuss the Creation of a Palestinian State

Ya’alon: Time for Israel to have a PM who doesn’t need investigating

Netanyahu can stay in power even if criminally charged, lawmaker says

Turkey dismisses over 8,000 in new wave of post-coup purges

US tanks arrive in Germany to help Nato defences

State election systems to get more federal aid for security

5,000 National Guard troops will be deployed for Trump swearing in

Obama set for pardon frenzy as he leaves office

Obama Denies the Murder Wave on His Watch

If You Listen to Liberals, Why Not Kidnap and Torture White People?

Snowstorms Cause Pileups, Power Outages Along the East Coast

Christian singer booted from ‘Ellen’ for preaching against homosexuality