Calvary, Couponers, and Crafters » Calvary » Mindful Monday for 7/4 – Where Did That Come From?

Mindful Monday for 7/4 – Where Did That Come From? 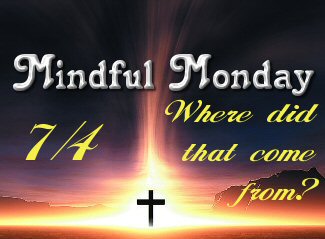 When I read the devotional I’m sharing for this week I just kept nodding my head 🙂  This is a personal pet peeve of mine.  “The devil made me do it”, “Satan made me _____”, “God told me to tell you _____” and so on.  You know the type. They tend to get along well with the “name it and claim it” crowd.  People who know just enough scripture to cause trouble for themselves and others. And don’t even get me started on prosperity teachers!

I do believe in the power of the spoken word but not everything we feel we need or want at the moment (regardless how noble and pious it sounds) is the will of God for us.

“Beloved, do not believe every spirit, but test the spirits to see whether they are from God, for many false prophets have gone out into the world.” -1 John 4:1

God wants the very best for us, but sometimes the very best comes through the very worst we think we can endure in this life.  This life is not all there is.  The Lord allows us to go through things that will help us, through enduring those trials and tribulations life throws our way, to become the people we need to be to be useful for His kingdom and also for eternity.  This life is barely a blip on the screen of eternity. If everything we ever wanted or thought we needed was laid out before us, we would be spoiled brats with a bigger-than-life sense of entitlement.  We would never learn to be thankful, compassionate, and gracious. We would never bow the knee in prayer to our God because sometimes hard times are the only things that get us on our knees.

Remember those cartoons when we were kids that had an angel on one shoulder and the devil on the other each whispering things in a person’s ear, each trying to get them to do their bidding?  That’s all that is…a made up cartoon -a fairy tale.  Where’s the personal responsibility?  Sometimes the enemy (principalities, powers, and rulers of darkness) tempt us of course. However, just like Eve and the serpent:  the serpent tempted, but Eve made the decision to give in to sin.

“When tempted, no one should say, “God is tempting me.” For God cannot be tempted by evil, nor does He tempt anyone. But each one is tempted when by his own evil desires he is lured away and enticed. Then after desire has conceived, it gives birth to sin; and when sin is fully grown, it gives birth to death.…” –James 1:13-15

You will more than likely never hear me say, “Satan has really been attacking lately”, or something similar.  (I will usually say, “the enemy has been attacking”. I know he himself attacks God’s people and the Word of God says,

“Be sober-minded and alert. Your adversary the devil prowls around like a roaring lion, seeking someone to devour. Resist him, standing firm in your faith and in the knowledge that your brothers throughout the world are undergoing the same kinds of suffering.…” 1 Peter 5:8-9

HOWEVER, Satan himself is NOT the equal opposite of God.  He cannot be everywhere at once and he cannot read our thoughts.  He is a fallen archangel. I know he sought to attack the disciples and I think he is active in world governments and those in the church who are on the front lines, but when you and I are under temptation or attack, it will most likely be one of his minions -demons. I don’t like giving Satan credit because he is not God’s equal opposite.

On the flip side of that,  the passage in James 1 above tells us that we are “lured” and “tempted”, and “enticed” but most importantly it is never God that does it, and secondly we are tempted by our OWN evil desires.  The flesh.

“that, in reference to your former manner of life, you lay aside the old self, which is being corrupted in accordance with the lusts of deceit, and that you be renewed in the spirit of your mind, and put on the new self, which in the likeness of God has been created in righteousness and holiness of the truth.” –Ephesians 4:22-24

So the enemy tempts, lures, and entices, but they use our own sinful nature to do it.  We have to take responsibility for the times we give in to sin.  Satan and his fallen angels have been around since before the beginning of mankind. They’ve seen it all. They know our weaknesses.  The more time we spend in the Bible and worshiping the Lord and fellowship the more like Christ’s our nature will be and less likely to give in to temptation.  It’s our choice.

We are in a war, don’t misunderstand me. We have a very real enemy who seeks our destruction.  I’m all about the movie, “War Room“, and I have a “War Binder” and am part of a Facebook groups dedicated to the creation of and using of War Binders and Documented Faith. But our armor is not in name bashing the enemy and blaming them alone, but in taking responsibility for our nature.  We wage war by time in prayer and the Bible, putting what we learn through prayer and the Bible into action in our lives, and growing in our faith with one another. We wage war by (from 1 Peter 5:8-9):

“Finally, my brethren, be strong in the Lord, and in the power of his might.  Put on the whole armour of God, that ye may be able to stand against the wiles of the devil.  For we wrestle not against flesh and blood, but against principalities, against powers, against the rulers of the darkness of this world, against spiritual wickedness in high places. Wherefore take unto you the whole armour of God, that ye may be able to withstand in the evil day, and having done all, to stand.   Stand therefore, having your loins girt about with truth, and having on the breastplate of righteousness;  And your feet shod with the preparation of the gospel of peace;   Above all, taking the shield of faith, wherewith ye shall be able to quench all the fiery darts of the wicked.   And take the helmet of salvation, and the sword of the Spirit, which is the word of God: Praying always with all prayer and supplication in the Spirit, and watching thereunto with all perseverance and supplication for all saints…”

So the next time you hear (or are tempted to say), “Satan made me____”, or “God told me to tell you _____”  take this into consideration.  The devotion that inspired this Mindful Monday:

Many times we wonder if an idea that came to us is instruction from God, a deception from Satan, or just something we want to do. It is extremely important to know the difference and how to discern God’s voice, because it can have eternal consequences.

A lot of evil gets blamed on God when people say, “God told me to do it!” The Bible says in 1 John 4:1, “Don’t believe every message you hear just because someone says it’s a message from God. Test it first to see if it really is” (LB).

Does the idea you’ve got in your mind right now agree with the Bible? Because God’s will never contradicts God’s Word. God doesn’t say one thing and then change his mind and say another thing. If he said it, it’s true, and it will always be true.

God is consistent. He isn’t moody. He doesn’t change his mind. He will never tell you to violate a principle that he’s already given in his Word, the Bible.

If God tells you to do something, then he’s never going to contradict it. The first question you must answer is, “Is this idea in harmony with the Word of God?”

— Hearing the Voice of God, by Rick Warren

This is one of my all time FAVORITE songs, “The Warrior is a Child”, by Twila Paris.