Calvary, Couponers, and Crafters » Announcements » Off Hiatus! We’re Back After a LONG Hiatus

Off Hiatus! We’re Back After a LONG Hiatus 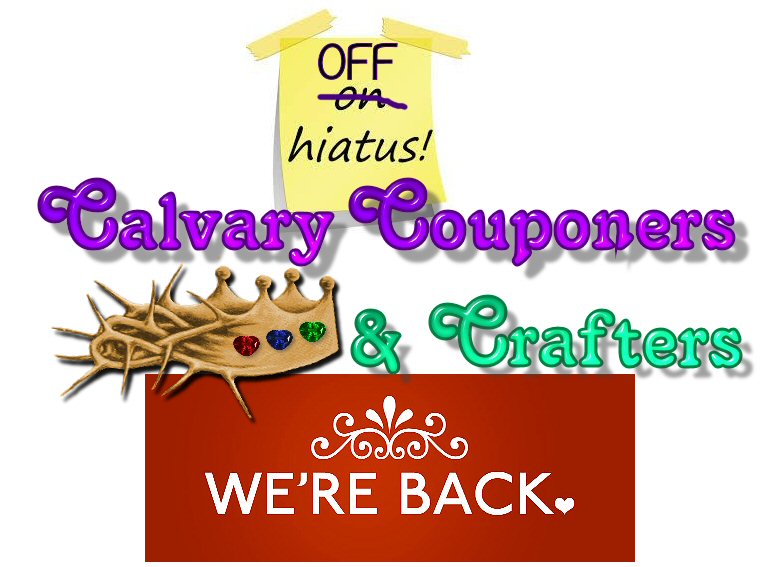 We’re back off hiatus!

After a long hiatus and way too much life drama, we’re back off hiatus!  There is so much to do, but we’ll be easing into it as most of us are the new year we find ourselves in 🙂 There are almost 8,000 comments waiting to go through and from what I can tell, it’s mostly spam.  So for the sake of getting back on the horse again, I’m just going to send them all to the trash heap.  If you left me a comment during my time away and you don’t see it, that’s why. It got lost in a sea of spam and smut mail.

Why the hiatus?  Where to begin…

I posted about some of it in the past during my Mindful Monday posts, if I recall. Much has happened since then.

First of all, I spent over two years fighting to save our home from foreclosure. I did everything:  the government programs, the HUD housing counselor fighting for us, filing a mountain of paperwork including scanning and emailing a ton of stuff to the housing counselor – just a LOT LOT of work.  In the end, it was all for naught.  We lost the home we had built and lived in for over 12 years. The home I brought my son into the world to.  It’s been heartwrenching.

So…towards the end of that fight I started having a world of hurt with my arm/shoulder.  I had surgery for a torn rotator cuff (along with nearby tendons that were damaged) on January 6th 2015. I was in a sling for 10 weeks and couldn’t have blogged had I wanted to; and sleeping in the recliner in the living room for five of those weeks.

Once I’d recovered enough it was time to start packing.  It’s a big house.  Lots to pack and lots to panic about. During the midst of all the packing and new home searching my mom was diagnosed with demensia.  We decided to move back to my home town (an hour from the home we lost) to be near my mom.  So long story short, we’re back in Richland County, Ohio (old for me, new for my husband and son) near my mom who is living with my sister at the moment.  Mom’s house (the home I grew up in) just sold as she can’t live alone any longer. So sad for my mom…depressing for me. That house was our family’s for over 50 years!

We found a house to rent in a school district that would be a good fit for my son with autism. They have a good program for him and though it’s on the other side of town from my sister’s house, it’s a good place for my son and he is my number 1 priority. This town isn’t really huge, so it’s only a 20 minute drive to see my mom, and it’s literally right around the corner from my mom’s church.

The move was really difficult on my family emotionally and physically. It took morework than any one family with disabilities should ever have to endure, but after many months it’s done.  Our garage is full of unpacked boxes, but it’s done.

I spent a lot of time being depressed, struggling with anxiety over what the future would hold (mostly for my mom) and just not wanting to get up out of bed in the afternoon (you read that right…).  But I’ve reconnected with a few old friends and my family and I are going to a Bible study at the home of a couple who had a Bible study I went to about 25 years ago. A few of the same people who went there way back when are there again too. We are still trying to find a new home church though.

I’d finally started pulling myself together -or rather the LORD pulled me together after I finally submitted to Him to have HIS will be done through all of this and was doing pretty well trying to get the new house settled and my family ready for the holidays.  Then tragedy struck a few weeks ago -December 19th, just before Christmas.  My best friend Morado passed away. (If you ever visted the blog we had just started to get off the ground before my house drama began you’d know her:  makeitfrugal.com) She’d been on dialysis for several years (and my long time followers would remember that my husband Greg had been on dialysis for 5 years then had a kidney transplant -doing well now), but she had some nerves in her back that were getting pinched and as a result she lost her ability to stand up or walk and thus was confined to a wheelchair. December 1st she went into the hospital to have what was expected to be an uncomplicated surgery to unpinch those nerves so she could walk again. As she was being prepped for surgery she had a heart attack and over the course of the next few weeks she suffered a stroke.  I was in the midst of making Buckeyes candy for Christmas when the call came that she had passed.  (She was in North Carolina, I in Ohio).

That’s been devastating to me.  We were friends for nearly 20 years.  Spoke online every day, were together offline for some events here and there and the phone often, but online every.single.day.  When I got the first call that she probably wouldn’t make it through the weekend (she didn’t) I was worried about her eternal state.  I’d never been confident of where she really stood with Christ.  I panicked and freaked out to say the least.  I emailed a handful of churches in the Durham, North Carolina area asked them to visit her and share the gospel with her again before it was too late. Two pastors visited and got back to me. One said she was unconscious when they visited her and the other got to speak with her though she could only look at him. He said she was staring at the ceiling when he walked in and when the nurse (a Christian) told her that a pastor was there to pray with her, she immediately looked at him and watched him intently as he prayed for her (and hopefully with her).

Did she receive Jesus on her deathbed (if she hadn’t already in the past)?  I’ll never know.  It haunts me to be honest.  I did share the gospel with her over the years and planted a lot of seeds. I beat myself up thinking I should have been more assertive with her, but it was all up to her really, as it is with us all. I can only hope she is in heaven right now.  I know I’m really missing her…how many times I’d be right here on this screen typing a blog post and her friendly “boo!” would pop up in an instant message and we’d be chatting as I was preparing the blog posts.  My computer screen sure is silent these days when I’m online…   Sure I have lots of friends on Facebook, Instagram and whatnot, but Morado was different.  Not many days went by that we didn’t chat and on the rare days we missed, we’d be texting each other to make sure the other was ok.

So…Calvary Couponers.  I’ve really missed her and all of you. I kept telling myself during all the moving process that I’d start it back up for the holidays and onward. I almost did till Morado left us.  I’ve been feeling the itch to blog again and I’m sure things will be different now.  I’m going to post about coupons and deals of course, but I’m going to post a whole lot more about crafts (I’m really into Bible Journaling and Planners these days and Project Life still) and about my faith.  I learned my lesson with Morado…wondering if I’d shared Jesus with her enough, in the right way, too much, too little, too this or not enough that. If you’re a reader of Calvary Couponers you will hear about Jesus often!

Keep me in your prayers as I venture forward in my new home, new blog year, new challenges for a new year. I have to re-learn some things and learn some new things that came along in my absense, so be patient with me. Mostly pray for me if you will.    God bless you all…