Calvary, Couponers, and Crafters » Bible Prophecy » Weekend End of the Age Updates for 3/27/16 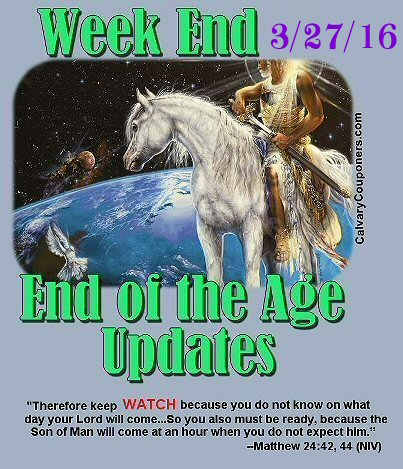 I hope you all had a wonderful Resurrection Day!  Easter is an amazing day of celebration, as it well should be.  Every Easter also brings us one step closer to the return of our Lord and Savior, Jesus Christ.  Here are our updates for this week:

(no Mid-East Prophecy Update for this week, rather Pastor J.D.’s teaching on, “The Importance of the Resurrection”.  Check back next week for the resumption of his prophecy updates!

(This is his yearly Easter video on “The Week that Changed the World”):

Christ in Prophecy (David Reagan): A Nation Begging for Destruction

This video isn’t brand new, but it is fairly recent and compelling. I hope you’ll agree.

Prophecy in the News (Gary Stearman):
“Syria’s War:  Who is Fighting and Why”

Why Yeshua Gave His Life

Is NATO Preparing for a Ground Invasion?

The US is Willing to Bomb Israel

“Meet Sophia–She Wants to Destroy You”:

Netanyahu links Palestinians and IS, says all terrorism has same goal

Former Israeli intel chief: Russia remains in Syria, it will not abandon fight

Heavy Russian airstrikes as Syrian army fights IS in Palmyra

Obama: US has increased intel cooperation, will review ISIS fight with world leaders

Turkey warns of IS terror threat to Jews, Christians this weekend

Tens of thousands of Yemenis mark a year of war, denounce Saudi-led offensive

GOP insiders: Nominee won’t be limited to winner of 8 states

GOP convention security gears up amid fears of threats

Thousands call for guns at US Republican convention

Will cellphone use while walking be banned in N.J.?

Ancient viruses in our genes can make us sick