Calvary, Couponers, and Crafters » Bible Prophecy » End of the Age Prophecy Updates for 9/18/16 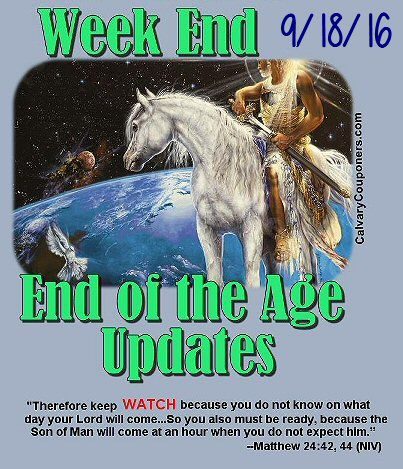 Hi everyone 🙂 I hope you’ve all had a good week in whatever little corner of the world you are reading this from! It’s been a difficult past few days for some of the world since I started compiling this yesterday. I’ve started putting this post together on Saturdays and finishing it on Sundays before I post it.  That way I’m not spending 2-3 hours on a Sunday with it. Since I began today’s compilation yesterday, we’ve had two (potentially) terrorist attacks in New York and New Jersey, and a terrorist stabbing attack in Minnesota. Please pray for all involved!  Pastor JD Farag and a few of the others that are posted after their Sunday services (John Hollar, Pastor Russell, and Superior Word) discusses this so I’ll let you get on with that.

Prophecy in the News: Kevin’s Korner – Wars and Rumors of Wars:

A Short History of Islam: From Muhammad to ISIS:

PM Netanyahu ‘This video shook me to the core of my being ‘:

John Haller from Fellowship Bible Chapel, Columbus, Ohio Prophecy Update for 9/18/16, “While You Were Sleeping:

Has Russia Given Syria The OK To Shoot Down Israeli War Planes?

Japan Joins The US For Military Drills In The China Sea

Evidence of Temple Artifacts being dumped

His Channel:  “World News Briefing”  Barry Stagner and Don Stewart 9/15/16 (click on image below to bring up page):

Jerusalem Channel: The Power of a Prophetic Act:

Joel C. Rosenberg:  “We winning the war on ISIS & Radical Islam? The President says yes. The experts say no. Here’s a 9-page fact sheet laying out the data.”

UNVEILING THE GREAT APOSTASY (2016): Arch of Triumph, Pope Francis and the Third Temple

Where Christian churches, other religions stand on gay marriage

Pentagon: US troops now operating with Turks in Syria

US, Iraqi troops close in on last ISIS-held city

8 injured by Minnesota stabber who ‘referred to Allah’

Between reckless ally and old rival, China in a bind over North Korea

Trump says ‘open borders’ cost lives and ‘this will end’

US Condemns Russian Elections in Crimea

In Russia, A New Parliament Is Expected To Act Much Like The Old One

“China May Be Earth’s First Nation to Detect Alien Life” – Poised to Flip ‘ON’ Switch of World’s Largest, Most Powerful Radio Telescope

More Than A Dozen Small Earthquakes In Oklahoma, 1 In Kansas

Obama: We Have Conversations About Climate Change in the Situation Room

ICC: Environmental destruction is a crime against humanity

Voluntary euthanasia: 17-year-old in Belgium first minor to be granted right to die under new rules