Calvary, Couponers, and Crafters » Bible Prophecy » End of the Age Prophecy Updates for 8/26/18 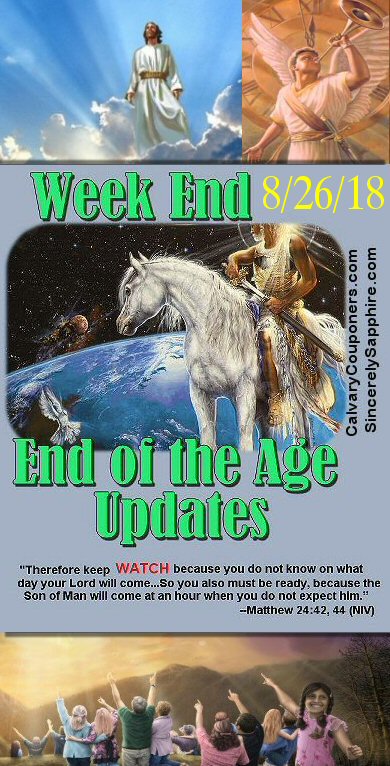 As we review these  prophecy updates this week, I’d like to remember Hawaii and all those affected by Hurricane/Tropical Storm Lane as well as the volcanic eruptions in Hawaii too.  Please keep all of them in your prayers!  This is all a reminder that we can expect these things in these last days.  For you scoffers out there, of course we’ve always had hurricanes and volcanic activity, but as Jesus said it would be like the birth pangs of a woman in labor, the occurences are getting more frequent, and much closer together.  If you don’t know if you have a saving relationship with Jesus Christ, I highly encourage you to do so now because the time of the end of the age is getting VERY near!

(No update this week)

I couldn’t find a video by Joel this week but I really encourage you to follow his blog posts HERE and HERE.

(no video this week -Jack was in Hawaii with pastor J.D. Farag)

(no video this week)

other videos at Shofar  –>

The price of peace negotiations: Stormy Daniels for Israeli settlements?

John McCain, military hero and Senate “maverick,” has died at 81

New protests in Iran as economy heads for collapse

Under fire from hardliners, Iran’s Rouhani calls for unity

Hundreds of neo-Nazis rally in Stockholm, met by counter-protests

Fad Or The Future? Robot-Made Burgers Wow The Crowds In San Francisco

Ebeko volcano in the Kuril Islands erupts to 17,000ft

Abortion pill can be taken at home in England, under new plan