Calvary, Couponers, and Crafters » Bible Prophecy » End of the Age Prophecy Updates for 8/14/16 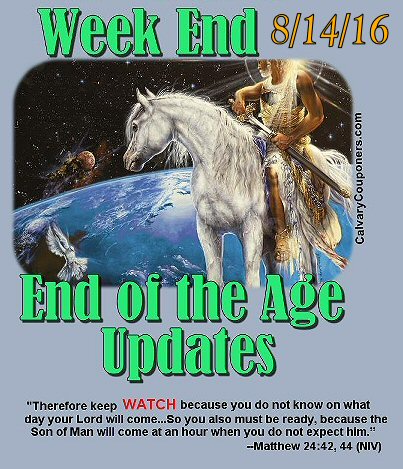 I’m a bit late posting this but it’s been one of those days where everything else seems to come first 🙂  (And my little guy had what may have been strep all week -may have been because he refused to unclench his jaws for a swab…autism….ugh.  He was really sick for about 4 days). Then I picked up my phone to post something to Facebook and my phone locked up.  I couldn’t unlock the screen and it wouldn’t even power down.  I pulled the cover off to clean it before I took it to Verizon tomorrow to get it looked at and after I had gotten the case pulled off and was cleaning it, the phone rebooted itself and is fine now.  Weirdness…  🙂  Anywho…  on to our weekly prophecy updates!

Christ in Prophecy (David Reagan): “God and the Weather, Pt. 2″:

END-TIMES-NEWS AUG 14, 2016 – WAR BETWEEN ISRAEL AND HEZBOLLAH IS INEVITABLE:

Russia Will Not Give Up Crimea:

Other Videos This Past Week from Steven:

Bomb Alert On Planes In Bound To Belgium

Russia Did Not Invade Ukraine

His Channel:  “World News Briefing”  Barry Stagner and Mike MacIntosh 8/11/16 (click on image below to bring up page):

Jerusalem Channel:  “The UN and the Temple Mount”:

US will not ‘foreclose’ UN options on two-state solution, Power says

Evangelical Lutherans to US: End Israel aid if settlements stay

At Least 2 Dead in Louisiana Flooding; Evacuations and Rescues Ongoing as Rivers Rise Toward Record Crests

Helicopters to drop supplies to 1,500 stranded motorists on I-12 in Louisiana

Flooding might increase mosquitoes and Zika risk in Louisiana

Obama: ‘Much more to do’ on climate change

The coming age of the chimera