Calvary, Couponers, and Crafters » Bible Prophecy » End of the Age Prophecy Updates for 9/11/16 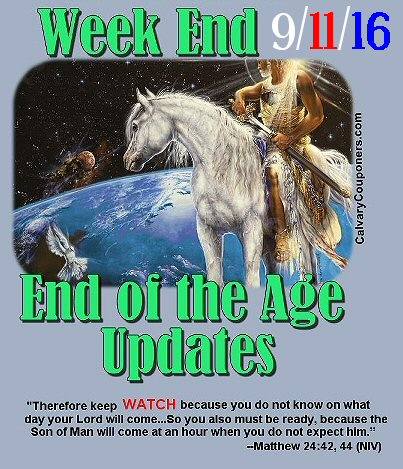 Before we get to our End of the Age prophecy updates for this week, I’d like us to take a moment to spend a moment with the Lord and pray for protection for America and her allies on this 15th anniversary of the terrors that struck our world on 9/11.  Please pray for protection and also for REVIVAL that we come back to our Christian roots and draw near to our Lord in these last days.  Do you remember where you were on that fateful Tuesday?  I sure do. I’ll never forget it.  Take a moment before reading on and say a prayer with me, won’t you? The first few videos below are dedicated to that. I’m praying for revival to sweep across our land. The Love of Jesus Christ finds a way.  Never forget!  America, never let this happen again!

Now, on to our weekly prophecy updates:

Hal was on the Art Bell radio show recently! (I just stumbled upon this), but check it out!

John Haller from Fellowship Bible Chapel, Columbus, Ohio Prophecy Update for 9/11/16, “The Handwriting is On the Wall”:

(no mid-week updates this week as Pastor Russell is ill)

“Is the Obama Administration Pressuring Israel To Provoke Syria?”:

Other Videos This Week by Steven:

Turkey Did Not Remove ISIS From Jarabulus

Ecumenical Movement In Jerusalem Is Not of The God of Israel

Israeli Peace Talks To Be Held In Moscow?

The Superior Word Prophecy Update, 11 September 2016 (The Pizza that Burns):

His Channel:  “World News Briefing”  Barry Stagner and Mike MacIntosh 9/08/16 (click on image below to bring up page):

A non-profit organization for LGBTQ students, Campus Pride, has published a “shame list” of 102 colleges that it says are the “absolute worst campuses for LGBTQ youth.”

Nigeria Facing ‘a Famine Unlike Any We Have Ever Seen’

America’s Sheriffs Are Boldly Proclaiming “In God We Trust” –But Atheist Organization Wants Slogans to Read, “In Reason We Trust”.

Witchcraft, Islam And Humanism Are Filling The Spiritual Void Left By The Dying Church

Mortar fire from Syria spills over into Golan Heights

Syria: bitter foes weigh up chance of peace, but prepare for war to rage on

At least 45 killed in Syria after US-Russia agreement

Germany warns of threat from more than 500 ‘potential attackers’

Muslim Pilgrims Begin Hajj, but This Year Without Iranians

US military: Iranian behavior getting worse in Persian Gulf

Ahead of 9/11 anniversary, US makes note of global threats

5 Ways the Global Economy Could Slide into Another Great Depression

Clinton expresses regret for saying ‘half’ of Trump supporters are ‘deplorables’

North Korea’s bomb is more powerful, but worry is miniaturization

Move over DNA. Scientists can identify you based on the unique pattern of proteins in your hair

‘Franken-bugs’ may be our best weapon against Zika

After a summer of deaths and arrests at rave concerts, solutions are hard to find