Calvary, Couponers, and Crafters » Bible Prophecy » End of the Age Prophecy Updates for 1/22/17 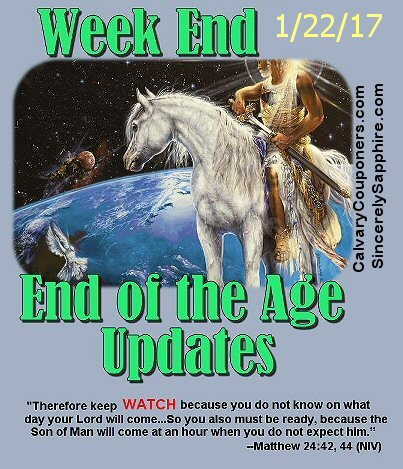 (No new video this week)

(no new video this week at this posting time)

Israeli leader to Iran: “We are your friend, not your enemy”

Trump-Netanyahu meeting may be held in first week of February

Netanyahu tries to put the brakes on right’s annexation bid

Preventing the next terror attack from Israel’s prisons

Trump to CIA: We have to get rid of Islamic State

Trump Rejects Notion of Feud With CIA in Day-One Visit

Blast in camp for displaced Syrians near Jordan kills 4

At the US Holocaust Memorial Museum, a virtual encounter with a Syrian refugee

Egypt and Saudi Arabia: The end of an alliance?

Le Pen: Nationalism will sweep across Europe in 2017

German Press: “That Was No Presidential Speech; That Was A Declaration Of War”

Donald Trump, day two: ‘Half a million’ join Women’s March on Washington, as new US president gets to work undoing Obamacare

Madonna at Women’s March: ‘I have thought an awful lot about blowing up the White House’

12 people dead after landslide in China