Calvary, Couponers, and Crafters » Bible Prophecy » End of the Age Prophecy Updates for 2/5/17 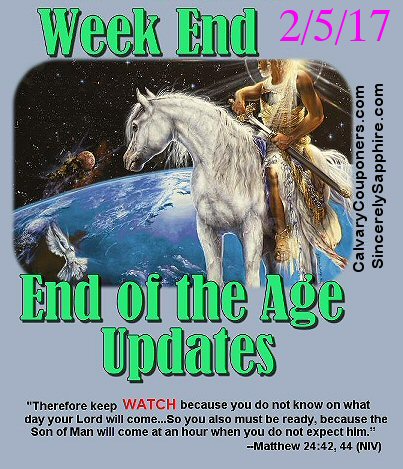 I’m thankfully glad to be getting this out earlier this week than normal 🙂  I’ve been struggling with insomnia for the past few years and this past few weeks have been praying harder than normal for the Lord to deliver me from this.  This past two days, however, I’ve been able to go to sleep at a normal (for me) time and get up a good time.  That after being awake for 24 hours and a few days later, 32 hours all in the same week.  I appreciate those of you who have prayed for me and told me you were 🙂  God bless you 🙂  I went to bed before my son last night and woke up at 7 am.  Unheard of for me 🙂   So I got busy with my blogs and getting this ready to send out to you.  Also, pastor J.D. Farag’s video was released earlier today than I’ve seen it to be before (his recording of his prophecy update is coming from Hawaii, so he is 5 hours behind me).

I’d love to hear some input from some of you after listening to some of these!  God bless you all and I hope you all have a great week and spend time in God’s Word! 🙂

Iran tests missiles and radar systems in defiance of US sanctions

(no new video posted this week)

You can see Jonathan Cahn’s new book, The Book of Mysteries, here:

You can get Bill’s book, Apocalypse Road here:

Trump voices hope Russian can help in fight against ISIS

Trump tweetstorm disparages judge for ‘ridiculous’ opinion, warns it could lead to ‘death and destruction’

Trump is targeting up to 8 million people for deportation

Tancredo: The Disgusting Media Double Standard Between Obama and Trump

Out-of-state conservatives are some of Calexit’s biggest fans

50-car pileup on Interstate-5 caught on camera in Portland, Oregon