Calvary, Couponers, and Crafters » Bible Prophecy » End of the Age Prophecy Updates for 3/26/17 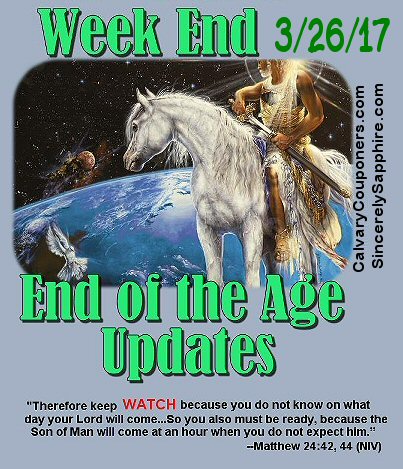 Pastor JD Himself is on vacation and will be back next week.  There is an updates this week, however, by his guest speaker, Pastor Bud Stonebraker

You can get Joel’s new book, “Without Warning”, by clicking on the book image below.  I’m currently reading it and am about 2/3 through it.  Like all of Joel’s books (and I own and have read them all) it’s awesome! Joel does not disappoint 🙂

You can check out Carl’s book, “When the Lion Roars”, here:

Under the Dead Sea, warnings of dire drought

As Israeli forces go on high alert after Faqha killing, Hamas may be looking to avoid a war

US command: Mosul airstrike occured at the request of Iraq forces

McCain: “The New World Order Is Under Enormous Strain”

Violence breaks out at pro-Trump rally in Huntington Beach

Trump supporter thought president would only deport ‘bad hombres.’ Instead, her husband is being deported.

Can Republicans govern if they can’t keep a promise they’ve made for 7 years?

Thousands of monkeys are dying from yellow fever in Brazil

Should it be illegal to be a stay-at-home mom? Why feminists are so frustrated

A Night Among the Witches Fighting the Trump Administration