Calvary, Couponers, and Crafters » Bible Prophecy » End of the Age Prophecy Updates for 7-24

End of the Age Prophecy Updates for 7-24 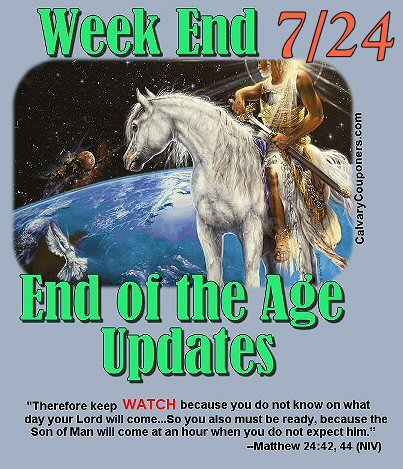 The intense news seems to never end of late, does it?  Maranatha! Come Quickly, Lord Jesus!  There is so much going on in the world it’s hard to keep up with! I leave that to those I share the teachings below by 🙂  I’m grateful that God has gifted those who can keep it all straight for us!

Prophecy in the News (Gary Stearman): The Spirit of Lawlessness with Dr. Kevin Clarkson:

A Look into the Brexit Vote:

John Holler from Fellowship Bible Chapel, Columbus, Ohio for 7/24:  NO VIDEO POSTED YET

I’ll check back later, but if there is a new update, it will be here:  https://www.youtube.com/user/KoinoniaABF/videos

However, Pastor Mike Clapham has done a recent series on “The Day of the Lord”.

The Day of the Lord, Part 1

The Day of the Lord, Part 2

The Day of the Lord, Part 3

Other Videos From This Past Week by Steven:

India In A Standoff With China – Sends 100 Tanks To The Border:

“His Channel:  World News Briefing”  Tom Hughes and Mike MacIntosh 7/21/16 (click on image below to bring up page):

The Jerusalem Channel:  (No new video posted yet) https://www.youtube.com/user/JerusalemChannel/videos

Partial Rapture Theory is a Lie of Satan by Barry Scarbrough:

I’m not necessarily endorsing the following channels just yet, but think they may warrant our consideration. Most are from this past week, a few may be a bit older. Share what you think!

Other Videos This Week from End Times Headline News:

DAHBOO77:  Several videos about the Democratic National Convention in Philadelphia:

‘In choice between territories and peace, I prefer peace,’ Ben-Gurion said in 1968

Israeli athletes under threat as terrorists vow to hit Olympics

Munich Jewish community leader: We will not be intimidated by terror

The Flashpoint No One Is Talking About: The Black Sea

Russia’s Ban on Evangelism Is Now in Effect

Kerry: Air conditioners as big a threat as ISIS

Turkey does not plan to extend emergency rule, but will if needed – PM

Trump: France, others hit by terror may face more screening

‘Trump supporters rising up, disgusted with elites, no trust in media’

Democratic National Convention: With protests predicted, businesses warned to batten down the hatches

The Lure of ‘Pokemon Go’: Respite From a Summer of Violence

5.4 magnitude earthquake hits off the coast of Guerrero, Mexico

Fire near Santa Clarita continues to burn out of control, explodes to more than 20,000 acres

A Sequel to the Paris Climate Accord Takes Shape in Vienna

Op-Ed: Trump Is No Friend to the LGBTQ Community