Calvary, Couponers, and Crafters » Bible Prophecy » End of the Age Prophecy Updates for 7-31-16 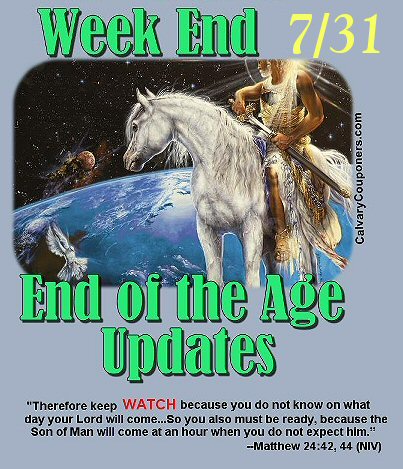 I hope you all have been well this week!  July has been a very busy month for me. This past week there was a doctor appointment every day but Monday! Are you all getting as tired of all the political coverage as I am? Ugh. We lost Dr. Tim LaHaye this week as well.  Co-Author of, “The Left Behind Series” many of us love as well as many other prophecy-based books.  I know many of us loved his books and thoughts on the Pre-Trib Rapture.  There’s a lot going on in our world that points to prophecy though, so let’s get to it!

Doug Stauffer: One Book One Authority:

Ron Rhodes: The Prophecies of Daniel

Israeli News Live (Steven Ben DeNoon): “US and Saudi Arabia Behind The Downing of Russia’s SU 24?”:

“US Turkish Base In Danger”:

Other Videos From Steven This Past Week:

The Harlot Rahab:  Her Prophetic Story

Update EU is in Turmoil

Is PM Netanyahu Stepping Down?

German Officials Call For Gun Control – Is It A UN Agenda?

A Night of Terror for Germany and Florida

Pokemon Go a Tool for Spies and Terrorists:

“His Channel:  World News Briefing”  Barry Stagner and Mike MacIntosh 7/21/16 (click on image below to bring up page):

“Prophecy Autopsy | The Thief in the Night EXPOSED! Bombshell! + Q&A!”:

The Jerusalem Channel:  Troubles in Turkey:

More videos from End Times Headline News from this past week

I’m not necessarily endorsing the following channels just yet, but think they may warrant our consideration. Most are from this past week, a few may be a bit older. Share what you think!

On her big night, Hillary Clinton stresses Israel’s security, not quest for peace

The Absurdity of Suing Lord Balfour for Israel’s Existence

US man charged over online threats to ‘slaughter’ Jews

Hamas exploiting current calm to prepare for next war

Isis is escalating its violence against Iraqi civilians. Why doesn’t the world care?

Turkey and U.S. at loggerheads over purge of top military officers in wake of coup attempt

No clean bill of health for EU banks in stress test

Homeownership Rate in the U.S. Drops to Lowest Since 1965

When will she blow? Iceland’s vicious Katla volcano rumbles

US, China Use Controversial Methods to Control Weather

China’s $30 million project to control the weather: Cloud seeding and other technology to be used in bid to combat drought and natural disasters

July 2016: an extraordinary month of news