Calvary, Couponers, and Crafters » Bible Prophecy » End of the Age Prophecy Updates for 9/17/17 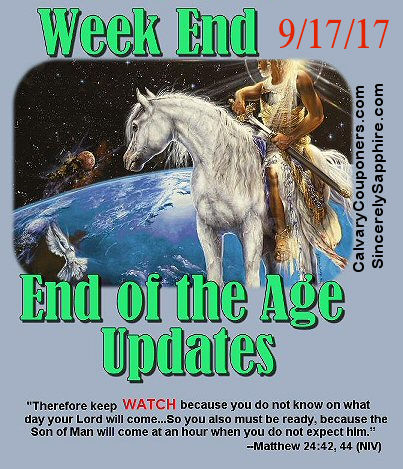 Hi everyone! I pray you all are well and blessed this week.

There is so much happening in our world! Just when one disaster winds down, it seems like another has been following close behind it.  I really feel called to continue doing these weekly updates to inform you and I both as we watch for the Lord’s return.  Also, in hopes of reaching those fence-sitters who need to fall over to the side of Christ in time!  There are many of you out there possibly reading this who do not know if you are ready to meet the Lord should today be the day. I encourage you, if you do not know, visit this web site.

So I’m sitting here working on this week’s prophecy update and this tab opens in my browser that I didn’t open.  I have no idea how it came to be open in front of me, but in case this is from the Lord, I’m sharing it here before our usual updates.  It’s interesting so far:

(no new videos that I could find this week, but  I really encourage you to follow his blog posts HERE and HERE).

Joel has a new book coming out in March called The Kremlin Conspiracy I’ve already pre-ordered on Amazon 🙂 Check it out! –>

(no video this week as he’s doing a prophecy conference) 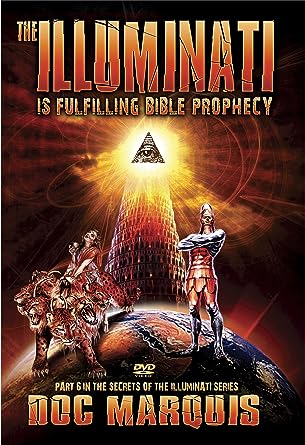 (their updates temporarily suspended due to technical difficulty)

Iranian Revolutionary Guard commander says it has ‘father of all bombs’

Netanyahu gears up for meetings with Trump, world leaders

Netanyahu said to refuse meeting at UN with Swedish premier

The Big Question as the U.N. Gathers: What to Make of Trump?

Israeli Consulate in NY opens again despite threat against PM

Egypt court sentences 7 to death over links to ISIS

With Assad’s fate secure, Russia sets its sights on Isis fighters in Syria

Iraqi PM: Up to 1,260 civilians killed in fight against ISIS in Mosul

Iraq could use force if Kurdish referendum leads to violence

Timeline of recent terror attacks against the West

Nigel Farage: Terrorists Are Known to Authorities in ‘Nearly Every Single Case’

Tough talk from Kim Jong Un, but expert says it may signal an ‘opening’

US scrambles for response to North Korea’s nuclear ambitions

To shoot down or not? North Korea launch highlights intercept issues

Facebook handed Russia-linked ads over to Mueller under search warrant

College Park, Maryland won’t allow non-citizens to vote in local elections after all

Fearful of Trump’s America, asylum seekers from across the globe stream into Canada

Apple’s New “FaceID” Could Be A Powerful Mass Spying Tool

Hurricane Jose and Tropical Storm Maria could dance the Fujiwara!

Battered St. Martin residents fight to survive, struggle to decide whether to remain

Paris climate deal: US denies it will stay in accord

San Diego is struggling with a huge hepatitis A outbreak. Is it coming to L.A.?

With Chelsea Manning Invitation, Harvard Got a Discussion It Didn’t Want

Philippines’ Duterte asks head of human rights agency – ‘Are you a paedophile?’

Will Las Vegas Be ‘Amsterdam on Steroids’? Door Opens for Pot Lounges

Only 6 Percent of Brits Are Practicing Christians Who Read the Bible, Attend Church Regularly: Poll