Calvary, Couponers, and Crafters » Bible Prophecy » End of the Age Updates for 4/24 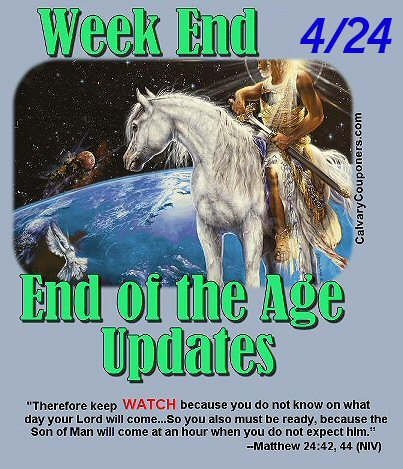 I apologize for being a day late with this. At the usual time I post this I was having a lot of back pain and didn’t want to write a blog post as I thought it would be difficult to focus.  (I have spinal stenosis). But better a day late than never 🙂 Here are our weekly end of the age updates! I’ll be listening along with you!

Other Videos This Week By Steven:

Why are Rabbis Among Harlots?

United States and Russia Face Off

Other Videos This Week by Sky News:

Everything Bad is Christians’ Fault

The Final Roman Emporer, The Islamic Antichrist, and the Vatican’s Last Crusade

“His Channel:  World News Briefing”  Barry Stagner and Mike MacIntosh 4/21/16 (click on image below to bring up page):

Islamic Movement: Israel is trying to take over al-Aqsa Mosque

Smotrich: Ban on Jews at Temple Mount is ‘national disgrace’

A Jew from Pakistan pleads: Let me make aliyah

President Sisi urges Egyptians to ‘defend state’ ahead of protests

Egyptian President calls to stop ‘forces of evil’ against him

Iran: US ‘incapable’ of attacking us

Obama pushes for global trade deals in face of opposition

Pope to youth: Happiness can’t be downloaded like an app