Calvary, Couponers, and Crafters » Bible Prophecy » End of the Age Updates for 6/12 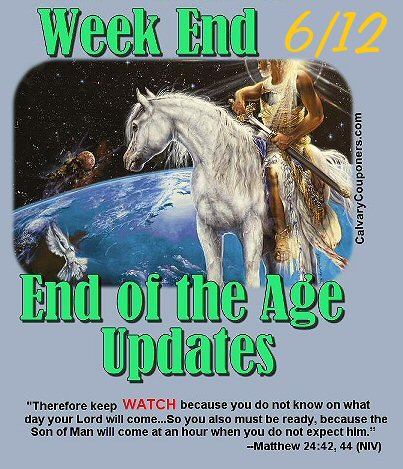 As I begin this post for this week’s End of the Ages Updates, in light of the mass shootings at the Pulse nightclub in Orlando, Florida early this morning; I’d like to remind you all to pray for all those affected individually and for our country as a whole.  Pray for the love of Christ to be felt there, pray against the ideaology of terrorism that perpetrates this, and remember to pray for the souls of all those involved: victims, witnesses, and also the terrorists. Jesus gave His life for all of us. Remember:

“For we are not fighting against flesh-and-blood enemies, but against evil rulers and authorities of the unseen world, against mighty powers in this dark world, and against evil spirits in the heavenly places.” -Ephesians 6:12 (NIV)

In addition to that, a breaking news story about an attempted attack in Santa Monica, California just came across. You can read about that here:  “Man with Arsenal of Weapons, Who Said He Wanted to Go to the L.A. Gay Pride Fest Arrested in Santa Monica…”

Pastor J.D. Farag’s Mid-East Prophecy Update for 6/5/16. (He does address the shooting in Orlando and the political implications):

Christ in Prophecy (David Reagan): (no new videos this week…)

With lightning speed, the liberal media is racing to the bottom trying to spin the overnight attack on the Orlando night club frequented by the gay population as a “gun control” issue, not a terrorist attack. Yet at the same time, IS IS is praising the attack and promising that more are to come.

Changes At The Garden Tomb

Inside The Meeting With President Putin And PM Netanyahu

Woman Detained By Police For Carrying The Bible

Secret Plans To Take Over Jerusalem Without Firing a Shot

I’ve been sharing this for years…the Bible has always said in Isaiah that the WOLF will lie down with the lamb, NOT the lion! (My maiden name is Wolfe and it’s been something kidded about so I always remember that).

6/7/16: Honoring the Old Goat Demons (this goes along with the first article I shared in last week’s updates):

“His Channel:  World News Briefing”Barry Stagner 6/9/16 (click on image below to bring up page):

I’m not necessarily endorsing the following videos, but think they may warrant our consideration. Most are from this past week, a few may be a bit older. Share what you think!

Hamas and Fatah to hold talks in Qatar

Taliban Jihadists Skin Man Alive After Ripping His Eyes Out

Thousands protest against drones at U.S. Air Force base in Germany

If ‘Brexit’ wins, fear gets into the marketplace: Bill Gross

Does Bilderberg Really Run The World? One Chart To Help You Decide

Under My Skin: The New Frontier Of Digital Implants