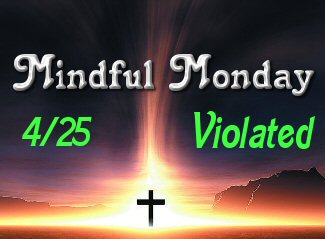 Have you ever felt violated? I doubt there’s a single one of you reading this who can honestly answer no.  Whether something traumatic like someone attacking you or something as small as a toy stolen as a child; we’ve all been there.

As I shared in my previous post about being the mommy of a child with autism and the daughter of a mother with dementia, I’ve had a lot to blame God for if I chose to.  Aside from that, my husband had a heart attack in 2005 and went into kidney failure in 2006. He was on dialysis for 5 years and got a kidney transplant in 2011.  We lost our home last summer. The home my husband and I designed (along with the builder) and had built from scratch to our specifications and wishes.  I brought my only child home from the hospital to that house.  It’s been very difficult!  Like most of us, I have things I won’t share here that occurred to me as a child that started me out as a child not being able to define what was happening to me to put the label of “violated” onto.  I was bullied horrendously in junior and senior high school. It was bad.  REALLY bad.  I really think looking back on it that had I not had pastors as BOTH my grandfathers and been taught the fear of God I may have succumbed to suicide as tragically many do.  I was SO worried when I put my autistic son in a mainstreamed school this year for the first time after moving to my hometown after losing our house for fear of bullies.

So as I said, both of my grandfathers were ministers. My mother really exemplified what a Christian woman is in many ways and if not for my grandparents and my mom, I’d never have learned the love of God and the redemption paid for my sins by Jesus.

But where was God when all of this was happening?  I grew up understanding ABOUT God’s love knowing all ABOUT the Bible and ABOUT Jesus.  In all honesty I struggled perceiving God’s love in reality.  My earthly father was a good provider and in between moments of bad memories, I have many memories of him that are good.  But as human nature would have it, the bad moments scarred me to this day.  My dad disciplined his three children with shame.  I was the baby and my sister and brother were both 9 and 7 1/2 years older than me (respectively).  My dad became disabled shortly after my sister and brother both married and moved out on their own.  I became his scapegoat. He would rage and belittle me something terrible.  Perhaps I’ll expound on that one day, but for now the point is this:  Where was God?  If my earthly father found so much wrong with me, why wouldn’t my heavenly father be the same?  My southern baptist grandfather (who I adored and named my son’s middle name after) preached hell fire and brimstone as he shouted and pounded the pulpit; and I heard so often about the wrath of God as a child.  Years later starting with a friend of ours we camped with, God started showing me all about His love and I started soaking it up like a sponge.

I still struggle with it from time to time, but I know in my heart of hearts that the Lord was there with me going through the abuse with me.  He wasn’t standing at a distance watching and refusing to get involved, and better yet, He wasn’t pointing at me and saying that I deserved every bit of it and didn’t deserve any better as my dad and the bullies at school said. I believe He wept right along with me.

In my You Version devotions, I just finished a reading plan called, “Finding God in the Ruins”, by Matt Bays.  I share a portion of that with you this week for this week’s Mindful Monday post.  I had tears running down my cheeks while reading this whole devotional series (7 days of devotionals, I think). I hope this speaks to you as profoundly as it did to me!

God watches us squirm. I don’t know if I will ever get used to it. I think of the atrocities of this world – ten year old Indian girls being sexually violated time and time again in the brothels of Mumbai, and I know God sees it happen, but also that he doesn’t intervene in the way that I would – that any of us would. When I sent God away, I wanted to know what was happening in the heavenly realms when life was brutalizing his children. I pictured God in Indian brothels, staring on. I imagined him leaning against the laundry machine in my basement, seeing all of it. In brothels and basements, I knew he was there. But what was he doing if not intervening?

“My bones are shifting in my skin, and you, my love, are gone.”

While writing this book, I sent an earlier portion of the manuscript to a good friend of mine. In chapter four I had written this statement:
”He participated in their horrors by being present.” This is what he sent back to me.

“Where is God? He is hanging there on the gallows. He’s not just in the brothel with the girl being violated, He IS being violated.”

He IS being violated.

I let the thought sink deeply into me. And for the first time in my life the crucified God looked different to me. He wasn’t watching, he was receiving. Before this moment I only had compassion for God on the Friday he was executed. That was the day his human rights were violated. But now I was faced with the idea of his crucifixion being stretched out until the end of time – that in every abysmal crime against us, every suicide, every abuse, every murder, rape, and every addiction, God himself was being violated.

God wasn’t staring on in the brothels of Mumbai, he was stuck on a dirty floor with a pedophile on top of him. And he wasn’t leaning against the laundry machine in my basement, he was being pierced, crushed, bruised, and wounded so eventually I could be healed. It happened to him every time it happened to me. It was him, the same as it was me.

Was it possible that God needed my compassion? Was it true that all of our sufferings combined were the total weight of God’s sufferings?

Is this what is meant by the weight of glory?

If we were abused, then so was he. If we were orphaned, then he was too. All of a sudden I wanted to reach out to God – to take care of him. He had been broken and abused the same as I – violated by his own family, left behind to suffer and then die.

I no longer wanted him out in the cold. I only wanted him back inside the warmth of my heart.

God is not a bystander to our suffering. His own son Jesus cried out from the cross, “My God, my God, why have you forsaken me?” He knows our pain. He has experienced it firsthand.

But if we know the end of the story, we know Jesus is resurrected from death. He is made new. So hold on, my friends, because you also will be made new. And you WILL overcome by the blood of the lamb.

–by Matt Bays, “Finding God in the Ruins”

We need to remember that Jesus said, Whatsoever you do to the least of these my brothers, you do unto me (Matthew 25:40)  When someone hurts a child of His, they hurt Him.  And, “”If anyone causes one of these little ones–those who believe in me–to stumble, it would be better for them to have a large millstone hung around their neck and to be drowned in the depths of the sea.” (Matthew 18:6).