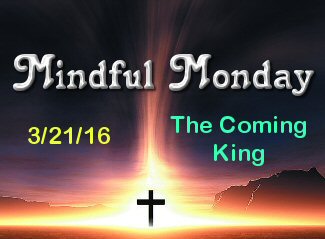 In thinking of what I wanted to share the Sunday that starts Holy Week for our Mindful Monday, I feel the need to share a few different things that really blessed me during my devotional time and Facebook time this past week. I know it will bless you too!  I know I’ve been sharing devotionals from one of my You Version devotions from, “Preparing Our Hearts for Easter:  A Lenten Devotional” the past few weeks, but that’s because I don’t think something I could write myself could top these Easter devotionals during this time of year 🙂  This one, “The Coming King”, is super timely as yesterday was Palm Sunday.  Palm Sunday starts Holy Week and we celebrate it in remembrance of when Jesus entered Jerusalem riding on a donkey and the crowds waved palm branches to him to welcome Him but mostly to honor Him as king.

Make sure you watch the video at the end of the devotional as I know it will warm your heart as it did mine! 🙂

In the Ancient Near East, a king entered cities riding on a warhorse in order to convey his military power, particularly when he was entering into newly conquered cities where his rule may have been regarded as illegitimate or met with suspicion or outright rejection. The exception to this custom was when a beloved king entered his own capital city. There he would ride in on a donkey — the benevolent king.

The prophet Zechariah speaks of a day when Jerusalem would see her king return. He would conquer the enemy once and for all, secure a lasting salvation and establish a new reign of peace for all. This hope of the true king, riding on a donkey, led the crowd to shout: “Hosanna to the Son of David! Blessed is he who comes in the name of the Lord!” when they saw Jesus riding into Jerusalem, yes, on a donkey.

And yet this crowd soon became the angry mob that cried for blood: “Crucify Him!” Jesus, who was once welcomed as the returning king, would be met with the violent rejection of a hostile people. The true king returned to his capital city to find that it had betrayed him. Yet still, he mounted a donkey, not a warhorse, and entered in peace. And he won the ultimate victory for his treacherous people by submitting himself to their violence — our violence — confirming our guilt and achieving our forgiveness in one decisive victory. The enemy this king would conquer turned out to be us, and the cost of the victory we longed for was the death of our beloved king. And he did it. Rejoice greatly, O daughter of Zion. Shout aloud, O daughter of Jerusalem!

Lord, we rejoice and shout aloud that you would give your life to pay the price for our treachery. We praise you as our beloved king we have been waiting for. Come reign in our heart, our lives and our city. In Christ’s Name, Amen.