Calvary, Couponers, and Crafters » Devotionals » Revisiting Mindful Monday: About Christian Love Towards One Another

Revisiting Mindful Monday: About Christian Love Towards One Another 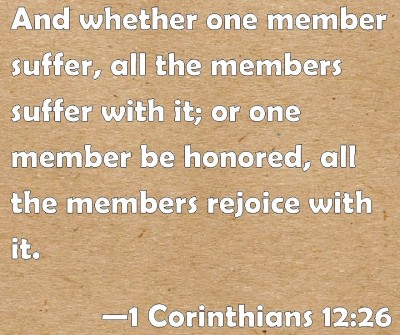 I decided to share a Mindful Monday post I shared almost five years ago.  There are so many Christians backbiting one another over the September 12th sign and my feeling right now is, “Lord, your people are making me so very weary….” so I felt called to share this again.  I hope you glean much from it!

The Bible has a few things to say about how Christians should treat one another:

“Therefore, as we have opportunity, let us do good to all people, especially to those who belong to the family of believers.” -Galatians 6:10

In John 13:35, our Lord Himself says, “By this everyone will know that you are my disciples, if you love one another.”

The writer of Hebrews tells us: “And let us consider how we may spur one another on toward love and good deeds, not giving up meeting together, as some are in the habit of doing….” (Hebrews 10: 24-25)

“Rejoice with those who rejoice; mourn with those who mourn. Live in harmony with one another…. If it is possible, as far as it depends on you, live at peace with everyone.”

This is on my mind a lot lately as it seems like every where I turn Christians are being unloving to each other, not showing compassion to each other, and in some cases being downright cruel…I could keep going, but you get the idea.  If Christians being loving towards one another is how the rest of the world will know that we are Christ’s disciples, it’s no wonder people watching them interact don’t believe.  I think this is a lesson every one of us who claim the name of Jesus in our hearts and lives needs to learn.

I know of a Christian group and a woman (a friend of mine) who had been part of the ministry for years. There was an incident after which she left hurt and heartbroken.  She was in genuine sorrow and felt abandoned, unloved, unwanted and unappreciated. Zero compassion. She entered into a conversation with a member of the group afterwards and through her broken heart was sharing what happened and how she felt.  In return the other party (defensive of the group itself) replied, “I think you’re using a little too much drama here.” Then she would make little remarks to hurt the already hurting woman whenever she had opportunity…snide remarks thrown out during “sharing”.

Was that helpful?  Was it compassionate?  Was it edifying? Was it the way one member of the body would treat another member of the same body who was genuinely in pain and hurting?  If you smash your hand in a car door, doesn’t the other hand immediately reach out for it? That’s just an automatic thing…we don’t even think about it. It’s just instinct to reach for the body part that’s been hurt.  Shouldn’t it be that way with Christians since Jesus says we are all members of the same body??

Whether the person commenting believed my friend had been wronged or not, how loving was it to react that way?  It was very risky for my friend who was hurt to let her feelings out and be vulnerable on top of already being heartbroken and when she got the return reply of “I think you’re using a little too much drama here”, by a sister in Christ who then went on to make snide remarks…

What would Jesus do? Is this how He would have reacted? Definitely not, but in the eyes of an unbelieving world, if they see Christians treating each other this way, they’ll think that’s how Jesus teaches them to be.  SHAME on us! Our lives are the only Bible some people may ever read!

So my hurting friend sought counsel from an outside friend. The outsider was kind to her and showed her compassion and later said, “That kind of thing is why I don’t go to church or Bible studies. Too many hypocrites.”  The hurt woman wanted to share her love of Jesus to the unbeliever, and say something like “I have to answer to God when I die and not them, so I go to church for the Lord. They have to answer to Him for themselves.”  But after hearing the hurting woman’s story, how can the unbeliever be talked into giving Jesus another try?  It’s so sad that Christians can be so unloving and derogatory towards one another and it. just. should. not. be. so. First for the members of the body, and then for those watching in from the outside!

Most people would tell my friend to seek counsel from her pastor. She had already sought counsel from him and was told in reply “It would be a waste of time.” Was that helpful?  Was it loving? Was it Christ-like? Now what’s the woman to do?

In both instances, the enemy is trying to get the hurting woman to believe she can get treated like that from the world, she doesn’t need to get it from people who are fellow Christians, so why bother with them at all? He knows she loves the Lord enough to not leave Him willfully, but if he can put a wedge between her and her point of ministry and fellowship, he thinks there’s a way he can silence her and destroy her testimony.

There was a time she would have succumbed to that kind of thinking, but since she knows her Bible and the fact that Ephesians 6:12 reminds her, “For we wrestle not against flesh and blood, but against principalities, against powers, against the rulers of the darkness of this world, against spiritual wickedness in high places”, she is spending time getting closer to Jesus and praying He gives her direction and that He softens her heart and those of her former group members. That He opens the door to a new fellowship if that is His plan. But she is not turning her back on her first love:  the author of life and love Himself.  If only we as a church…as His body… would learn to care for each other the way He cares for us individually.

“Now I rejoice in my sufferings for your sake, and in my flesh I am filling up what is lacking in Christ’s afflictions for the sake of his body, that is, the church” -Colossians 1:24

There is nothing we can do in human strength to mend our differences. We selfishly believe our preferences are better than others’ opinions. So what can we do when divisions arise? Just as Jesus said each time He was tempted in the wilderness: “It is Written”. Go to the Bible.  If you can find a scripture to back up how to treat someone (especially a fellow believer), it’s a fact backed up by the Word of God.  If you don’t have a scripture…it’s ONLY AN OPINION and not a fact and you should think twice before you act or react.  That’s the basis you can stand on. The Word of God.

“Therefore, as we have opportunity, let us do good to all people, especially to those who belong to the family of believers.” -Galatians 6:10