Calvary, Couponers, and Crafters » Bible Prophecy » Weekend End of the Age Updates for 3/20/16 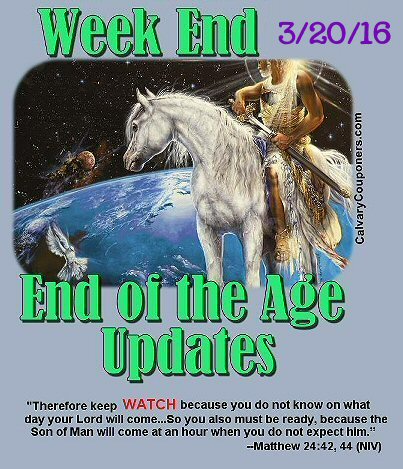 Hello family!  Every week we watch for what’s happening in world news events and review it through the lens of Bible prophecy as we watch the End of the Age Updates I share with us here on Sunday evenings. If you compare what’s going on in our headlines (and often through non-mainstream news sources) it’s very clear that the time is short in our expectation of the Lord Jesus’ return .  We are told multiple times in scripture to WATCH so we will be ready and that’s why I send this report out weekly.  Won’t you catch up with the updates with me?

Steven’s Other Videos This Week:

Who is the Antichrist?

The Name of Israel to be Removed

NOT THISPAST WEEK, BUT RECENTLY AND CURRENT:

Tagged Weekend End of the Age Update. Bookmark the permalink.