Calvary, Couponers, and Crafters » Bible Prophecy » Weekend End of the Age Updates for 4/10/16 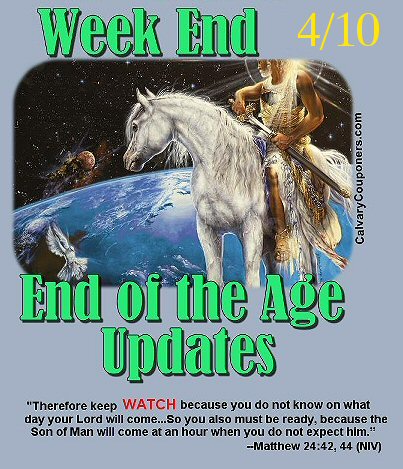 There is a lot happening this week in viewing world events through the lens of Bible prophecy.  It really seems to be escalating faster and faster every week! This week starts with the update by Pastor J.D. Farag who’s update today was JUST posted.  I leave you to it:

Prophecy in the News (Gary Stearman):  “The Topics”, with Billy Crone:

Is The Pope and Israeli Rabbis Courting The Mahdi?

Pope Francis to Embrace The Mahdi

Click here for more SkyWatch Videos from this Week

Click here for more videos from this week by L.A. Marzulli

Dr David Jeremiah 2016 | When America Would Turn Her Back on Israel:

US undecided on veto of UNSC resolution against West Bank settlements

Starting with the crucifixion, ex-ADL head’s new center to spell out anti-Semitism’s ABCs

Israel connects BDS with terrorism while cracking down on German banks

Belgium charges ‘man in hat’ from airport bombing with murder

US brings B-52s back to the Mideast to target IS

Arab democracies? Not so fast, say some

Brazil Braces for Impeachment Cliffhanger With Votes in Congress

Crewless ‘drone ships’ will be sailing the seas by 2020