Calvary, Couponers, and Crafters » Bible Prophecy » End of the Age Prophecy Updates for 10/30/16 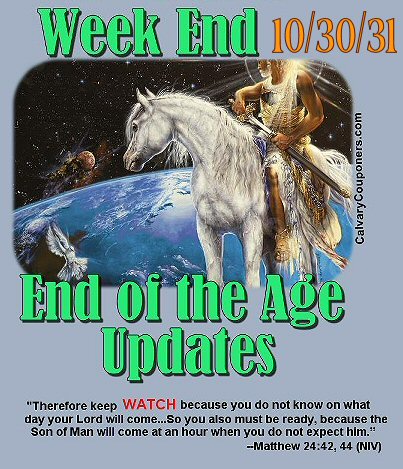 There are some really astounding things happening right now, especially here in the US with the presidential election and all its intrigue (to put it mildly) happening. It’s really discouraging for those of us who love our country. So I begin this week’s prophecy updates with a encouraging message from Jack Hibbs about our Blessed Hope!:

This leads to his recent video on The Persecuted Church (I couldn’t embed it in my post here):

Joel C. Rosenberg for The Joshua Fund on The Persecuted Church

An article rather than a video, but important nonetheless:

BREAKING: FBI reopens criminal investigation of Hillary. This is a huge story — especially coming just days before the election. Here’s the latest.

(This week’s video is  repeat, you can view that here if you’d like)

Prophecy in the News: Kevin’s Korner – The Internet Out of Our Hands (with Billy Crone):

Billy Crone – The World Religions Cults and the Occult Part 2:

(Not posted at the time of this publishing. Click the link below to see if its available yet.)

Censorship Stepped Up In Europe to Block Alternative News:

“Mark of the Beast”:

The Evidence That The Temple Mount is Jewish:

The Superior Word Prophecy Update, 30 October 2016 (The Stones Cry Out)

His Channel:  “World News Briefing”  Barry Stagner and Mike Macintosh 10/27/16 (click on image below to bring up page):

GA Governor Demands Pastor Hand Over His Sermons—and His Bible

Gregg Jarrett: Weiner, Clinton and the FBI’s chance at redemption = an election nightmare

It Is Happening Again! Voting Machines Are Switching Votes From Donald Trump to Hillary Clinton

Ivanka says Trump would ‘100%’ move US embassy to Jerusalem

Russia Blames US for Near-Collision of Planes Over Syria

Egypt tourism in limbo a year after Russian plane bombing

Abedin-Weiner electronic device was laptop, had tens-of-thousands of emails, source

John Fund: If Hillary wins, we’ll have a potential blackmail target in the White House

More than 15,000 near-Earth objects and counting

Cousin Of Polio May Be Causing Outbreak Of Paralysis In Children

Mormon and gay: Church says you can be both

South Korea: thousands of protesters call for president to resign