Calvary, Couponers, and Crafters » Bible Prophecy » End of the Age Prophecy Updates for 11/27/16 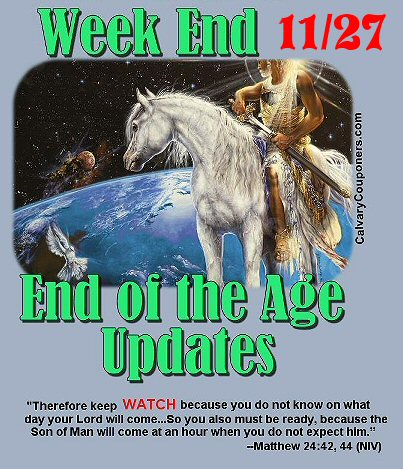 I hope you all had a wonderful Thanksgiving weekend!  I’m determined to enter into the Christmas season keeping the true reason for the season in mind.  Family will come and go, let you down, friends will be no show at times, but the Lord Jesus Christ entered humanity in the form of a precious newborn baby fresh from the Father in heaven brought into the harshness of the ancient middle east, ancient Israel which was under occupation by ruthless Rome.  It was not a surprise, it did not take Him by surprise.  He came on purpose knowing what He would find, encounter, and suffer.  His ultimate love and sacrifice more than deserves to be rejoiced over and grateful for and let us all keep in the front of our minds the image of the Babe in the manger sent for us. Rejoice!!  Be joyful!

Joel Rosenberg: no videos this week, check out his blog

Amir Tsarfati:  “Prophecy Update on the situation in Israel and Europe!”:

The Hal Lindsey Report:   November 26, “Danger From The East”:

Prophecy in the News:  “Jerry Robinson – The Bankruptcy of Our Nation – Part 2”:

(no update this week)

Fires continue to be extinguished in Jerusalem Hills, West Bank, after firefighting teams worked through the night

Anatomy of a firestorm: 180 injured, hundreds of homes in ruins, 33,000 dunams of parkland burned

With fires largely under control, Israel sets up emergency fund for those affected

Security officials: Arsonists ‘jumped on bandwagon’ after first fires, but this is no new intifada

Canadian imam asks Allah to burn all of Israel

Syria: Children play underground to avoid bombing as half a million remain trapped in besieged areas

Mosul Christians: IS are ‘grandsons of Satan’

The death of Fidel Castro, socialist leader of the third world, also marks the end of 20th century communism

As Castro dies, another revolution sweeps Cuba. The market economy has arrived

Judy Miller: Even with Fidel Castro gone, Cuba’s future is in doubt

Jill Stein a Clinton Pawn in Push for Recount?

Trump slams recount push as ‘a scam,’ says election is over

No Credit History? No Problem. Lenders Are Looking at Your Phone Data

Mass prayer for rain in Alabama