Calvary, Couponers, and Crafters » Bible Prophecy » End of the Age Prophecy Updates for 8/21/16 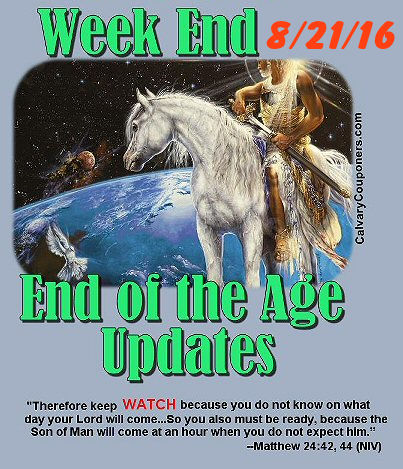 Before we get into this week’s prophecy updates, I just watched the trailer of a new movie that sounds awesome!  It’s called “Let the Lion Roar”.  Check it out:

This isn’t a video, but I highly encourage you to follow Joel C. Rosenberg through his blog by clicking  here or on the image right below.  Joel is my favorite author. I have all his books and am currently glued to his latest, The First Hostage. Check his blog on a regular basis.  This guy knows his stuff. He has worked in both US and Israeli strategic positions and has an amazing knowledge of the Middle East and Bible Prophecy!

Christ in Prophecy (David Reagan with Nathan Jones):  Can We Trust the Bible?:

Russia To Use Turkey Incirlik Airbase

Does Micah Prophesy Of The Return Of Moses?

Why Putin Fights So Hard Against The Horse Rider Of Revelation

The Black Horse His Rider And The Third Temple

The Superior Word Prophecy Update 8/21, “A Battle of Ideology”:

SkyWatchTV News 8/17/16: “Kings of the North and East Join Prince of Persia”:

Other Videos This Week from SkyWatch TV

His Channel:  “World News Briefing”  Barry Stagner and Tom Hughes 8/18/16 (click on image below to bring up page):

US, Ukraine urge end to soaring tensions with Russia

Analysis: What Israel gained from the Turkey deal and what it means for the region

Turkish PM says US should ‘speed up’ cleric’s extradition

Turkish PM: Assad may have a short term role in Syria

US military distances itself from Saudi-led war in Yemen

Starving to death in Nigeria: Boko Haram is threatening the lives of thousands

Biggest US total solar eclipse in decades happens next year

Tropical Storm Mindulle to strengthen into a typhoon, threaten Tokyo

Losing Louisiana: Shocking Images Of Life After A 1000-Year Flood

US officials grapple with recovery from Louisiana flood

Louisiana newspaper say ‘glad’ Obama has now decided to visit flood damage, after vacation is over