Calvary, Couponers, and Crafters » Calvary » End of the Age Prophecy Updates for 8/28/16 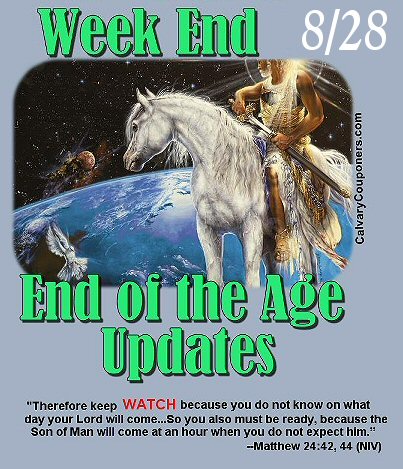 Hello everyone 🙂 I hope you all had a good week!  I was nursing a sick little boy all week and this is round THREE of this…whatever it is.  Over the course of the past six weeks or so, we’ve had him to the doctor four times with a high fever. Ugh!  Autism parenting is NOT for wimps!  He can’t speak to tell me what hurts and it’s really hard to guess at times. The mama bear that I am, my mind starts whirling with the, “What if it’s this…”, “Could it be that…”.  At this writing, his temperature was just 99.3 and he is eating much better.  His school started back last Wednesday and he hasn’t been able to go yet. He LOVES school so it’s been hard on him. I told him today he may be able to go back tomorrow and you should have heard him giggle 🙂  (I hope I didn’t speak too soon!)  I want him to feel better and be beyond this bug and I want him to go back to school as it’s good for him and he loves it.  I also hope to be able to get back to posting more often here on Calvary, Couponers, and Crafters and not having to be keeping an eye on him every second to make sure he isn’t wandering around outside will give me the liberty to have some time in my office/craft room.

I started working on this post last night and I thought I had saved it without posting it as it wasn’t ready yet, but I just came back to add the videos that weren’t posted till today and found that it had been posted.  I guess I had hit post out of force of habit 🙂  So for those who came to view this post and wondered what happened, that was it 🙂

I had to post these first two videos because many of you know how much I love the ministry of Joel Rosenberg.  I just finished reading his latest book (and I own them all), The First Hostage. As usual with Joel’s book, I could hardly put it down 🙂  A good prophecy friend of mine shared this with me last night and I got all excited and had to share it with you too 🙂

Joel Rosenberg – “Walk With Jesus In These Last Days!”:

I highly encourage you to follow Joel C. Rosenberg through his blog by clicking  here or on the image right below.  Check his blog on a regular basis.  This guy knows his stuff. He has worked in both US and Israeli strategic positions and has an amazing knowledge of the Middle East and Bible Prophecy!

Were The Jews Given The Promised Land | Joel Rosenberg 2016:

Prophecy in the News:  Dr. Kevin Clarkson:  “The Spirit of Lawlessness pt. 4”:

Paul McGuire: Prophecies for the Future of America

“Will Pope Francis Declare “One World Religion” From Jerusalem?”

Other Videos from this Past Week from Steven:

US Abram Tanks On The Move In Europe

American University In Kabul Under Attack

Rockets Fall On Israel From Gaza

Breaking US and Ukraine Fly Observer Flights Over Russia

The Superior Word Prophecy Update 8/28, “The Basics of Deja Vu”:

His Channel:  “World News Briefing”  Barry Stagner and Mike MacIntosh 8/25/16 (click on image below to bring up page):

In Hebron, Fatah faces a civil war at the polls

US pilots tell of high-stakes encounter with Syrian jets

Syrian war: US and Russia ‘achieve clarity on path forward’

As some Colombians seethe, others take to the street to trumpet historic peace deal

‘You can kill them’: Filipino police chief tells drug addicts to kill dealers

Czechs and Hungarians call for EU army amid security worries

Global central bankers, stuck at zero, unite in plea for help from governments

US Christian among first victims of Russia’s anti-evangelism law