Calvary, Couponers, and Crafters » Bible Prophecy » End of the Age Prophecy Updates for 9/4/16 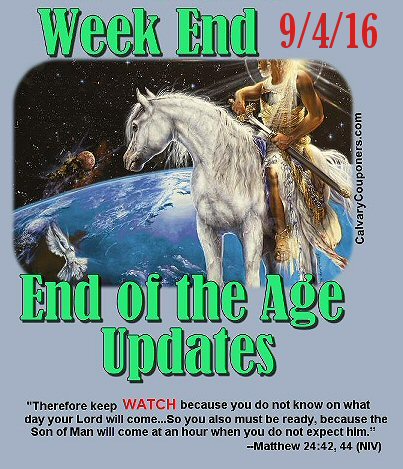 Thank you everyone for your prayers for my son. He’s been healthy for the past week so I’m really hoping that stubborn virus is gone.  He’s finishing up his third antibiotic at the moment and has just a few days of it left. I was a nervous wreck after a little more than a month of him being sick!  You guys are the best for your love and support of my little guy 🙂  I’m so glad he’s been able to go back to school!  He loves school.  Oh, and a big praise report!  I had mentioned that his old communication device broke down (the volume won’t work). We went through a bunch of paperwork and applications and he finally was awarded a new I-PAD!  I’m an Android-user, so I need to get familiar with his I-pad now 🙂   I hope you’ve all had a good week and are following the news with the Bible in mind.

Joel C. Rosenberg:  “America in a Troubled World What Does The Future Hold | Joel Rosenberg 2016″:

Prophecy in the News:  Dr. Kevin Clarkson:  Terry James: Rapture Ready… Or Not?:

President Putin Fights Taking The Mark of the Beast

Breaking US Marines Land On The Shores of Ukraine

Polish Soccer Fans Call For The Burning of Jews

SkyWatchTV News 8/30/16: EpiPen Scandal is All About Politics:

His Channel:  “World News Briefing”  Barry Stagner and Mike MacIntosh 9/01/16 (click on image below to bring up page):

Jerusalem Channel:  “Is Israel’s High Priest About to be Revealed?”:

Looking at the State of the Union in the United States from a Biblical Perspective (Aug. 19):

I highly encourage you to follow Joel C. Rosenberg through his blog by clicking  here or on the image right below.  Check his blog on a regular basis.  This guy knows his stuff. He has worked in both US and Israeli strategic positions and has an amazing knowledge of the Middle East and Bible Prophecy! (He is my favorite author too) I finished reading his latest book, “The First Hostage“.  I’m now re-reading the book that made me fall in love with his ministry, “The Ezekiel Option” simply because the world news today seems to be lining up so clearly with the Ezekiel 37-39 prophecy!

Iranian Ayatollah: The ‘Hidden Imam’ Will Arrive In A Vessel ‘Like A Spaceship’

It Is Happening. Israel, Turkey, Iran, Russia, Saudi Arabia … Are All Making Major Peace Treaty And It Is Time Westerners Understand What All This Means Prophetically

CHILLING VIDEO — NBC News crew threatened with arrest for filming a FEMA camp? You will be stunned by what the officer says to the reporter…

Single Christians Can Have Sex as Long as It’s ‘Mutually Pleasurable and Affirming,’ Pastor Says
Greg Laurie: Watered-Down Mainline Christianity Is a Sign of the End Times (Interview)

Despite gloom in Israel, PA officials insist Fatah will sweep local elections – even in Gaza

Palestinians protest after allegations surface of torture of hunger-striking prisoners

SpaceX hunting for clues to blast that destroyed Israeli satellite

Christian Militia in Iraq Liberates Village Once Held by ISIS

Turkish Tanks Cross Into Syria in ‘New Phase’ Against IS

Sen. Rand Paul: President Obama, what on God’s green earth is our policy in Syria?

UN: Death Toll Among Refugees Crossing Mediterranean Is Highest Ever

Defiant Merkel says refugees not taking away benefits from Germans

Myanmar Peace Talks End With No Breakthrough but Some Hope

Row on tarmac an awkward G20 start for U.S., China

How Spy Tech Firms Let Governments See Everything on a Smartphone

Hurricane or Not, Hermine Winds Up for Big Northeast Punch

The Latest: Storm surge likely up coast from Virginia to NJ

No new cases of Zika connected to the Olympics, WHO says

Modern life is killing our children: Cancer rate in young people up 40 per cent in 16 years

Inside Skid Row’s Spice epidemic, the dangerous cost of a dollar high