Calvary, Couponers, and Crafters » Bible Prophecy » End of the Age Updates for 6/5

End of the Age Updates for 6/5 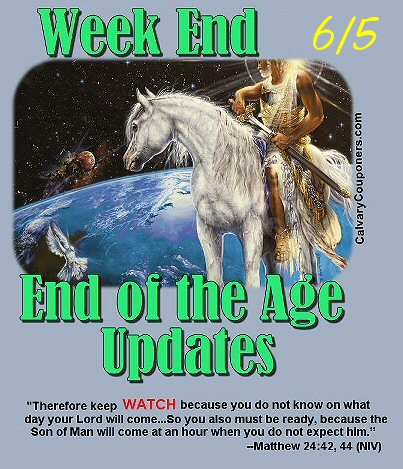 I hope you all had a good week 🙂  My family is adjusting as well as can be expected to my mom’s entry into a nursing home due to her alzheimer’s.  I spent a lot of time crying and crying out to God trying to understand why in between visiting her (usually with my son) every other day trying to maintain a calm, loving disposition while there.  More about that in another post, but I really appreciate all the comments and replies and offers of prayer for us. It means more than you can ever know! I absolutely do believe in the power of prayer.

Ok…this week’s end of the age updates. It seems like every week is more and more full of things to be a combination of excited and concerned about.

Before I get started on our regular weekly updates, check out this video. A friend sent it to me last night.  For those of us who know Bible prophecy, it’s self-explanatory…check it out –>

Christ in Prophecy (David Reagan): (no new video this week)

“Plans To Build Third Temple Next To The Dome of The Rock”:

Israeli News Live at the Kotel

Mount Zion Has Been Overtaken

“His Channel:  World News Briefing”Barry Stagner with Mike MacIntosh 6/2/16 (click on image below to bring up page):

Perry Stone of Mannafest: “Has the Tribulation Actually Begun?”:

I’m not necessarily endorsing the following videos, but think they may warrant our consideration. Most are from this past week, a few may be a bit older. Share what you think!

L.A.Marzulli, “Politics, Prophecy, and the Supernatural”, “The Spear of Destiny”:

There are so many other videos from the past week that I could share, but I’d run out of room quickly!

Obama punts again on moving US embassy to Jerusalem – will 2017 end stalemate?

Herzog: Israel must replace words with actions to achieve peace

Syria troops reach Raqqa as IS fights on four fronts

US now hitting IS targets from Mediterranean Sea

China pushes back against US pressure, says it has ‘no fear of trouble’ in South China Sea

Record 94,708,000 Americans Not in Labor Force; Participation Rate Drops in May

Sanders: ‘The Democratic National Convention will be a contested convention’

Amazon Founder, Jeff Bezos, Wants to Build Factories in Space in an Attempt to Save Earth

Due to scorching heatwave, massive wildfire has broken out threatening settlement of Karnei Shomron In West Bank

Sexuality today: how we embarked on a new age of freedom and tolerance – gender-fluid relationships, particularly among women, are on the rise. Have we reached a tipping point?

Queer and going to the mosque: ‘I’ve never felt more Muslim than I do now’