Calvary, Couponers, and Crafters » Bible Prophecy » Weekend End of the Age Updates for 4/3/16 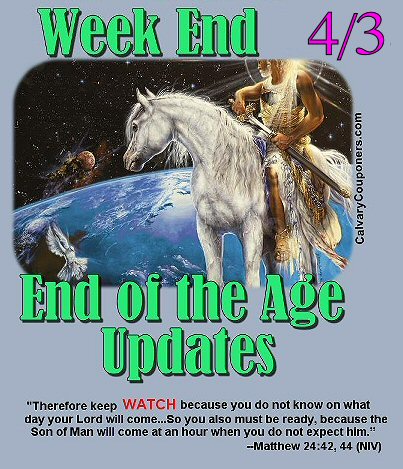 I’ve had a family emergency this past week, so I apologize for getting behind in my posts this week. It’s taken my full attention and couldn’t be helped.  It was also my son’s 13th birthday on Easter so we celebrated it Saturday evening with friends who treated us to dinner at Carrabba’s in the Cleveland area (yum!).  My son had a ball and love his birthday cake.  He was so well behaved. What a good boy I have! (keep in mind he has autism).  But driving back home to Richland County afterwards was NOT so fun! If I believed in mother nature, I’d say she played a really cruel April Fool’s day trick on us.  It should have taken me an hour to drive home but the weather was SO bad with thick blowing snow that it took three! I had no idea the weather was supposed to be so bad with such a bad winter storm. It was white-out conditions and traffic was creeping along just as I was at 20-40 mph most of the way.  I just kept watching the red tail lights of the vehicle in front of me and was gripping the steering wheel so tightly my hands hurt. Ugh! I sure hope that’s the last of that stuff for the season.  You’d better believe I was praying all the way too! I was so glad to have gotten home safely! 🙂    Ok, enough of my complaining and on with this week’s End of the Age Updates! –>

Steinitz: Israel a global leader in readiness for nuclear terror

Hamas leader: We are not interested in a new war

Dramatic video reveals airstrike on IS ‘chemical lab’ in Mosul

At least 31 reported killed in fighting between Armenian, Azerbaijani forces

As Ebola flares up, Guinea plans to vaccinate contacts of survivors

Trump accuses CBS of editing him out of context on abortion