Calvary, Couponers, and Crafters » Calvary » Holy Week Good Friday: What Are You Doing About Jesus?

Holy Week Good Friday: What Are You Doing About Jesus? 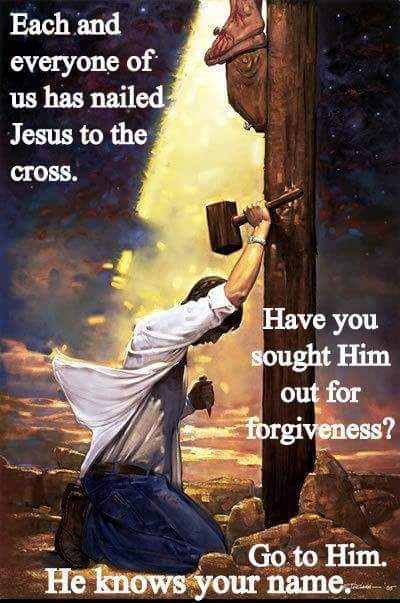 Today is the Christian holiday known as Good Friday.  There is much discussion in the Christian community about whether Jesus was really crucified on Friday or if it was really Wednesday or Thursday.  There are already good articles written on this subject and you can read those here:

Jesus Went to the Cross on a Wednesday

Was Jesus Crucified on a Wednesday, Thursday, or Friday?

The Case for a Thursday Crucifixion

What Day was Christ Crucified?

The important thing, however, is that He was raised! He is RISEN!  He WAS crucified, He WAS resurrected, and He IS alive forever more!

“So then, when the Lord Jesus had spoken to them, He was received up into heaven and sat down at the right hand of God. And they went out and preached everywhere, while the Lord worked with them, and confirmed the word by the signs that followed. And they promptly reported all these instructions to Peter and his companions. And after that, Jesus Himself sent out through them from east to west the sacred and imperishable proclamation of eternal salvation.”  –Mark 16:19-20

The truly important thing is that Jesus took our place on the cross to die for our sins and you need to decide what you are going to do about it.  Will you believe?  We all decide one way or the other, you know.  Because not choosing IS choosing. Deciding to not believe IS your belief.

“Why You Must Make a Decision about God”

Today I want to get personal with you and yes, put you on the spot. I want to ask you a question that you MUST answer. The answer to this question is a matter of life and death. Before I ask the question, however, permit me to give you some background.

In Matthew 27 we find Jesus standing trial before Pilate. Christ has been betrayed by Judas and arrested by the Roman soldiers. He is now facing Pilate who thinks he holds Jesus’ fate in his hands. Unbeknownst to him, what Pilate really holds in his hands is his own fate. As Pilate is sitting on the judge’s seat with Jesus standing nearby, he asks a question that should cause each of us to stop and think. It is doubtful whether Pilate truly understood the magnitude of the question, nor did he understand that he was making a decision that would affect his soul for all eternity.

Matthew 27:22 provides us with Pilate’s question. “What shall I do, then, with Jesus who is called Christ?” The immediate answer that came from the people was to crucify Jesus and that is exactly what happened.

Today I want to ask you, “What are you going to do with Jesus, who is called Christ?” There are only two answers to this question. You either accept Him as Lord and Savior of your life or you reject Him as Lord and Savior. There is no ‘I’ll think about it later’ option. If you choose to ‘think about it later’, then you have rejected Christ. Do you understand the implication of choosing to reject Christ? We are never told anywhere in the Bible that Pilate became a believer in Jesus, but let me assure you, if he continued to reject Christ as Savior, a split second after he passed from this world, he became a believer in Christ. Unfortunately, at that point, it was too late. He had made his choice in this life and he discovered that in the next life the consequences of that choice were not pleasant. Eternity in hell—everlasting torment—total rejection—complete aloneness—utter abandonment.

What if you choose to accept Christ? Is that the end? Absolutely not. Once we accept Christ as our Lord and Savior, we must then decide how we will answer that same question on a daily basis.  “What shall I do, then, with Jesus who is called Christ?”

Do I put Him in a ‘Sunday’ box and pull Him out when I go to church?
Maybe I interact with Him when I am in church and also call on Him when I am in trouble?
Do I let my friends know that I am a follower of Christ?  If I do, I’ll be different. I won’t be like everyone else.
What if someone makes fun of me?
What if I don’t fit in?

Every day Christians decide how they will answer the question, “What shall I do, then, with Jesus who is called Christ?”

Do I spend time in Bible study or do I let my Bible gather dust on the table?
Do I get alone with God in prayer and really get to know Him or do I turn on the TV or radio to fill the silence?
Do I go to church or do I go to the golf course or grocery store?
Do I make a choice to not watch television programs and movies that are inappropriate or do I watch them and think, ‘That violence, bad language, or sexual content doesn’t really affect me’?
Do I listen to uplifting, Christian music or do I listen to music that does nothing to encourage me in my Christian walk?
Do I choose to clean up my language or do I allow filth to spew from my mouth?
Do I encourage and support other Christians or do I have the attitude of ‘I don’t want to get involved’?

Hear Jesus’ words in Matthew 10:32, “Whoever acknowledges me before men, I will also acknowledge him before my Father in heaven.”

Again I ask you the question that you must answer.  “What shall YOU do, then, with Jesus who is called Christ?

Can God change your life?