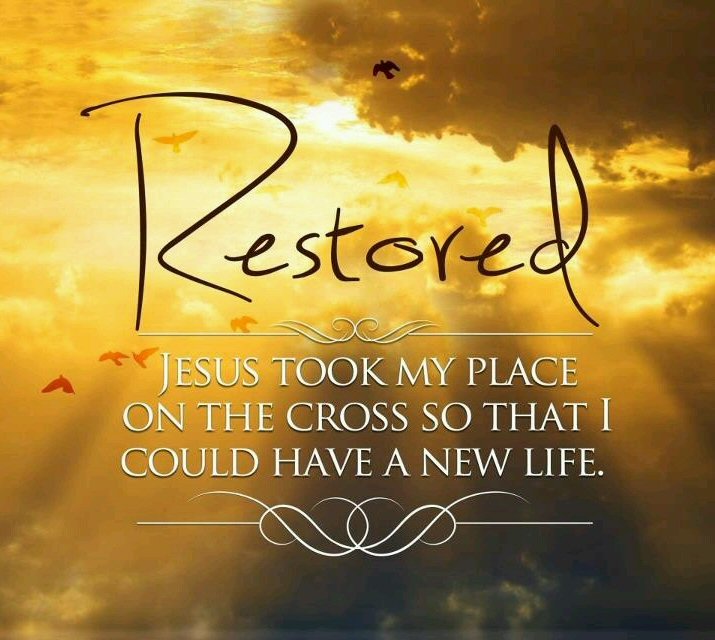 When people hear the phrase, “Jesus died for me”, they could be tempted to think, “What’s the big deal? People die all the time and sometimes in the place of their loved ones.”  Well Jesus did die for the world He loves but it was SO much more than that!  The place mankind fell from was the place Adam and Eve were in the garden before they gave in to temptation.  There was no sin. God walked with Adam in the cool of the evening in the garden.  Can you imagine the living God walking with you literally?

Before you’re too hard on Adam and Eve, you have to remember they had no reference point for consequences.  The world they lived in was perfect. They were physically perfect.  They were made in the image of God and all was as God said in Genesis, “and He saw that it was very good.”  Today we know the consequences for our sins.  But before the first couple fell they were spot on as God would have them be.  But after they gave in to temptation and gave in and ate from the tree of the knowledge of good and evil, immediate separation from God occurred.  The separation from God is the biggest consequence of our sins today as well!  Mankind now had to face death and had to work by the sweat of their brow in a world that was now fallen.  The consequences of their fall and separation from God affected the earth as well and indeed the entire universe, not just mankind.  You can read more about that here.   and also here.

Adam was the start of death for everything after he brought sin into the world.  It took a perfect man, a “Second Adam”, to remove the consequences of the Fall. That perfect man was and is Jesus Christ. When He hung on the cross, He took upon Himself the sins of the world.  Every sin that you and I would commit.  They were crucified with Him on the cross thereby restoring fellowship with God the creator. That’s why Jesus’ death was such a big deal.  He didn’t just die. Through the death of the perfect, sinless Son of God, he was our substitution and through that substitution restored us to God.  We can now be reconciled to God and fully restored.  That’s a very HUGE deal! The deal was sealed at the Resurrection of Jesus, but I’m getting ahead of myself. Check back for tomorrow’s Easter devotional for that 😉 Like any gift, it’s offered to you, but not really yours till you reach out and accept it and receive it to yourself.  For how to do that regarding Jesus taking your place on the cross and restoring you to the Father, click here! 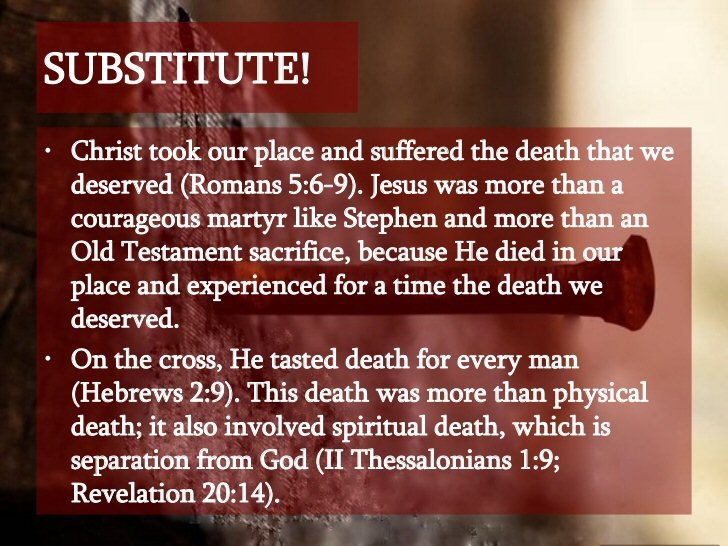 Thought for Today: He was forsaken so you wouldn’t have to be.

Just after making sure two people He loved would not be alone, Jesus had to face being forsaken by His Heavenly Father.

Until that moment, Jesus had spent every waking moment of His life fully connected to God.

Every word His Father gave to Him, Jesus spoke. Everywhere Jesus went, His Father was there.

But when Jesus cried, “My God, my God, why have you forsaken me?” He felt the weight of separation from His Father. The greatest agony He could ever experience unlocked the greatest opportunity Jesus would have to show His love for you.

As Jesus neared death on the cross, He was forsaken so you wouldn’t have to be.

We are not promised a life free from abandonment. People will abandon us, just as the disciples abandoned Jesus in the Garden of Gethsemane. Occasionally, the pain of our circumstances can cause us to look around, wondering if God has abandoned us as well.

While there will be moments where you feel far from God, Jesus’ death on the cross forever guaranteed that you will never be separated from Him. The moment Jesus felt apart from His father ensured that you would never have to spend a moment apart from Him.

The enemy can use moments of loneliness and pain to distract you from the potential and purpose God has for your life.

Open your eyes today to the persistence of His presence.

Lord, I confess there are times in my life when I feel like everyone, even you, has abandoned me. Give me the faith to see that you have never left me. Help me to see that you were abandoned so I would never have to be. Let me focus on your presence today. In Jesus’ name, Amen.

Even in your greatest moments of agony, God is there. He promises to never leave us or forsake us. What is one area of your life that feels empty and abandoned? What is one way that you can see God in this situation? As you face this struggle, seek ways to recognize God’s presence.