Calvary, Couponers, and Crafters » Devotionals » Mindful Monday for 10/17/16 – The Reward of Your Trials 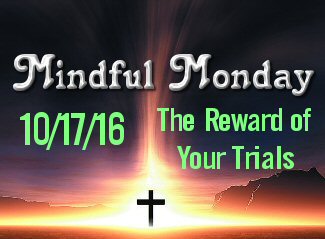 I’m a few hours late in posting this, but better late than never as they say 🙂  I wasn’t dilly dallying though. I was working hard taking down the canopy on our deck (which was more work than it sounds!) and sweeping the leaves off the deck and getting it presentable. (Then suffering with the resulting back pain –ouch!)  Also putting a big fat check mark next to “take down canopy” in my planner for today 🙂   It feels so good to accomplish what you have planned for the day!  I’m getting a much better handle on the spiritual fruit of “self discipline” through the use of my planner. I love it!  This post also is the last thing I need to do to finish off my plan for the day and earn that last check mark 🙂

I read this during my devotions last night and it ministered to me and I’m hoping it will to you.  We all tend to think about our trials and ponder why God is allowing us to go through them, but I’d bet not many of us meditate on our trials enough to consider the rewards of those trials!  Can I get an amen? 🙂

This week’s Mindul Monday post is by David Jeremiah from this book, “What to Do When You Don’t Know What to Do.”

“Contemplate the Reward of Your Trials”

James has made us aware that our trials produce patience and maturity and cause us to seek and follow God’s wisdom. But adversity is also riveted to the future, for trials guarantee future blessing as well.

Jesus also promised a reward for those who are faithful under persecution in Matthew 5:10, 12.

The reward that James promised is a “crown,” from the Greek word “stephanos.” This word was used to identify the woven thorns that were placed on the head of our Lord as He was prepared for crucifixion. Paul referred metaphorically both to the Philippians and the Thessalonians as his “crown.” Writing to Timothy, Paul described his future reward as “the crown of righteousness.” Peter called it “the crown of glory that does not fade away,” which will be given by the Chief Shepherd when He appears. The apostle John called it “the crown of life” and indicated that it would be among the crowns cast at the feet of Jesus in heaven. We are saved by trusting in Christ, but we are crowned when we are tested by fire and continue to love Him.

Andrew Murray was suffering from a terribly painful back, the result of an injury he had incurred years before. One morning while he was eating breakfast in his room, his hostess told him of a woman downstairs who was in great trouble, and wanted to know if he had any advice for her. Murray handed her a paper he had been writing on and said, “Give her this advice I’m writing down for myself. It may be that she’ll find it helpful.” This is what was written:
“In time of trouble, say, ‘First, He brought me here. It is by His will I am in this strait place; in that I will rest.’ Next, ‘He will keep me here in His love, and give me grace in this trial to behave as His child.’ Then say, ‘He will make the trial a blessing, teaching me lessons He intends me to learn, and working in me the grace He means to bestow.’ And last, say, ‘In His good time He can bring me out again. How and when, He knows.’ Therefore, say, ‘I am here (1) by God’s appointment, (2) in His keeping, (3) under His training, (4) for His time.’”

If you have enjoyed this plan and would like a chance to win the entire book it came from, click here

from David Jeremiah, “What to do when you don’t know what to do”.

“Blessed is the man who remains steadfast under trial, for when he has stood the test he will receive the crown of life, which God has promised to those who love him.”–James 1:12 ESV

“Blessed are those who are persecuted for righteousness’ sake, for theirs is the kingdom of heaven. “Blessed are you when others revile you and persecute you and utter all kinds of evil against you falsely on my account. Rejoice and be glad, for your reward is great in heaven, for so they persecuted the prophets who were before you.”  –Matthew 5:10‭-‬12 ESV