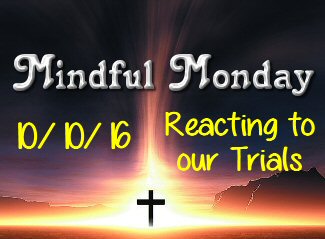 This week’s Mindful Monday devotional is a real attitude adjuster.  I will leave my intro at that because it adjusted mine 🙂

From the David Jeremiah book, “What to Do When You Don’t Know What to Do”

“Consider Your Reactions to Your Trials”

When you experience trials, you often catch yourself reevaluating life. If you happen to be rich, you realize that trials can bring you down to poverty. Most of James’s readers were poor and had become even poorer through the persecution leveled against them. But James would not let them be discouraged. He told them that they should rejoice in the fact that they were being exalted. They had been low and were made high! Through poverty, they had developed a humble spirit that would keep their hearts open toward God.

R. W. Dale reminds the poor man of his true position in Christ:
“Let him remember that he is a prince, and glory in it. He is a prince on his way to his kingdom, traveling by rough roads, enduring many hardships, suffering from hunger, cold, and weariness, and the people among whom he is traveling do not know anything about his greatness, but he knows; let him glory in his high estate!”

James’s reference to the wealthy man and the comparative shortness of human life reminds him of the wildflowers that carpeted the hillsides of his native land. They were dazzlingly beautiful for a few weeks in the spring after the rains had come, but their beauty was always short lived. Using poetic language, James describes the blistering heat that followed the rainy season and withered the flowers. The short life of blossoms in Palestine provided a good illustration of the rich man. When the heat of trials separated the wealthy from his wealth, the Christian rich man calculated that he would have had it for only a short time anyway. He knew that he had really lost nothing since Christ was everything to him.”

–a YouVersion Devotional  from the David Jeremiah book, “What to Do When You Don’t Know What to Do”

“Blessed are the poor in spirit, for theirs is the kingdom of heaven.”  –Matthew 5:3 ESV

“Let the lowly brother boast in his exaltation, and the rich in his humiliation, because like a flower of the grass he will pass away. For the sun rises with its scorching heat and withers the grass; its flower falls, and its beauty perishes. So also will the rich man fade away in the midst of his pursuits.”  –James 1:9‭-‬11 ESV